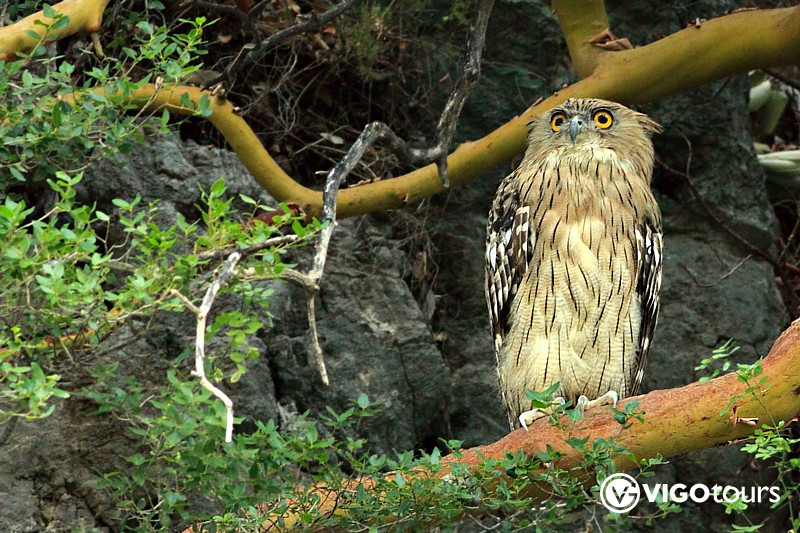 There aren't many people who saw them, however you can do this with none critical efforts. Enjoy a guided non-public bird-watching tour for the Brown Fish Owls of the Green Canyon at the Taurus Mountains in Manavgat.

It was known that fish owls existed in countries such as Israel, Iraq, Jordan and Lebanon in the Middle East until 40-50 years ago. However, fish owls are thought to have been extinct in these regions due to wars. Today, they are known to continue their presence in India, Sri Lanka, Pakistan and Thailand in southern Asia.

Brown Fish Owl were recorded in Turkey for the first time at the end of the 18th century. And from that date until 2009, very few fish owl was seen in Turkey.

The brown fish owl was thought to be extinct in Turkey. However, after a long time they were seen again and recorded. Today their populations have increased remarkably. As a result of several serious birdwatching studies conducted in 2009, three fish owls were found in the Mediterranean region. Today, the population of fish owls in Manavgat and its vicinity is thought to be about 50 individuals.

The number of animal species in nature decreases as a result of famine, over and uncontrolled hunting, climate change or shrinking habitats. This may even go as far as extinction. But sometimes the species that we think are extinct will reappear after a long time. Here in Turkey are the brown fish owl One of these species.

Fish owls are generally birds with reddish brown and yellowish brown feathers. There are black and dark brown stripe-like thick cut hairs on the dorsum. The abdomen is covered with yellowish white hairs. These feathers include fine lines of black or dark brown color. Fish owls have bright golden eyes and pale greenish gray beaks. The top of the heads is flat. The ears are large and covered with feathers. It is a large owl with a length of 55 cm and wings up to 150 cm. Female fish owls are larger than male fish owls.

Fish owls live in trees in lowland plains or in open woodlands along lakes or rivers. They make their nests in caverns on the cliffs, dried trees or old nests of birds of prey. They usually hunt at night but fly in daytime in cloudy weather. They watch their prey over the trees or rocks on which they perched.

They feed on frogs, crabs, rodents and reptiles. Unlike other owls, they fly on the surface of the water and catch fish.

The breeding time of fish owls lasts from November to March. They mostly breed between January and February. Juveniles of fish owls in the Antalya region are seen at the edge of their nests from mid-May. Usually there will be 2.

The fish owl is in the “low risk” category of the red list prepared by the World Conservation Union (IUCN). This category means that their lives are not threatened and their populations in nature are high. However, due to tourism activities, the living areas of fish owls are shrinking and due to pollution of the rivers, their living conditions are unfortunately getting worse.

Compared to eagle owls of comparable size, fish owls are usually even shorter in tail length and even heavier in build, have comparatively bigger wings, have considerably longer legs, and have a rough texture to the underside of their toes. At least the latter two options are clear adaptations to assist these owls in capturing fish.

It is determined by night vision camera in India that fish owls feed on about 18 species of vertebrates and invertebrates such as fish, snakes, frogs, rodents and lizards. Camera recordings lasted 23 days and 192 feeding flights were detected. During the incubation, the feeding activity of females and chicks is carried out by the male. The female individual deals with the egg and nest.

Total Petrol Station - Side Alanya Junction https://goo.gl/maps/CGfoG3ZgiSg2Jh6u5 Pick up is possible from hotels in Side

Total Petrol Station in Side https://goo.gl/maps/CGfoG3ZgiSg2Jh6u5 Pick up is possible from hotels in Side (main entrance of the hotels)

Early reservation is required
In order to keep fish owls not being disturbed: No camera flash is used and no smoking please.

Hello, I plan a trip to Turkey next week with my family and I would like to include a boat trip to see the fish owl. Are the trips every day? What is the price for 1 person? And for 2 persons + children (9 & 11 yr)? Thanks

Hello, Thank you for contacting us. Since the winter period was very dry, 2 pairs of fish owls in the lake have not been seen so far this year. They probably made a short migration in the area. However, it is very difficult to see fish owls in the lake at the end of July. They appear for a very short time at night and rest in cool rock cavities during the day. This is because the weather is very hot. Instead of fish owls in the lake, it is possible to observe 1 pair of fish owls on the side of a small stream in the mountain, and the chances of seeing them all year round are higher, but only at night with light. The price of this; It is 125€ for up to 2 people, 50€ refunded if not seen. This place is about 85 km from Side. The price includes round-trip and return transfer from Side. We wish you a perfect holiday with unforgettable holiday memories in Turkey. Best regards, Vigo Tours

I saw you plan tours between March-July to see the Brown Fish Owl. Is it possible to see this bird in August? I will go to holiday on that month. Have you tours in August also or have you any other possibilities? Thank you!

Hello from Vigo Tours, Thank you very much for contacting us. It is very difficult to observe brown fish owls in the lake in August. Due to the very hot weather, they go out to hunt for a short time at night, and mostly rest in cool rock cavities. Unfortunately, it is not possible to observe the lake at night. Instead, it is more likely to see 1 pair of brown fish owls on a mountain riverbank in August. This place is about 100 km from Side. And 1 couple here is seen throughout the year, though not every day. We can go there for observation. However, the observation is made after 9pm at night, when it gets dark with the light of a torch. Fish owls there are completely nocturnal. Our price is 125€ for up to 2 people, if we can't see the fish owls, our price is 75€. It is also possible to see Tawny owl and Scops owl on the road, close to fish owls. We wish you a wonderful holiday with unforgettable holiday memories in Turkey. Best regards, Vigo Tours

Hi, I am currently in Belek. Is there any chance to see the owls somewhere in August? Thanks

Hello, Thank you for contacting us. Due to too hot, At the Oymapinar lake 2 pairs can not be seen in August. There is only a chance to see 1 pair near a river at the the Taurus mountain, about 100 km far from Side (150 km from Belek). They can be seen only in the night at dark, by lantern light. Price is 125€ from Side. In case we do not see any owl the price is 75€. At the same place scops and tawny owls can be seen as well. But the bird watching guide will be on a birdwatching tour with a group till 18 August. So, nowadays he will be not available. Kind regards, Vigo Tours.

Owls are awesome. Thanks vigotours!

Fly Fishing Tour at the Taurus Mountains from Side

Wellness massage at the traditional Turkish Bath in Side

Horseback Riding on the beach in Side

Big Game Fishing Tour in Side