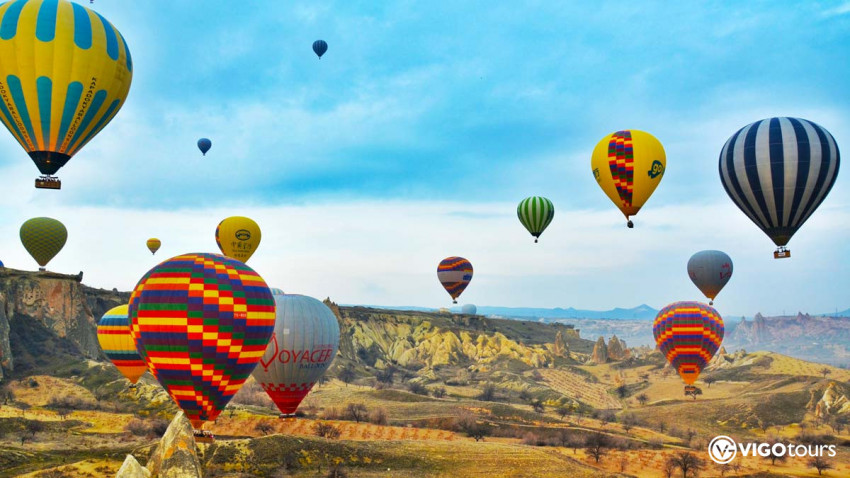 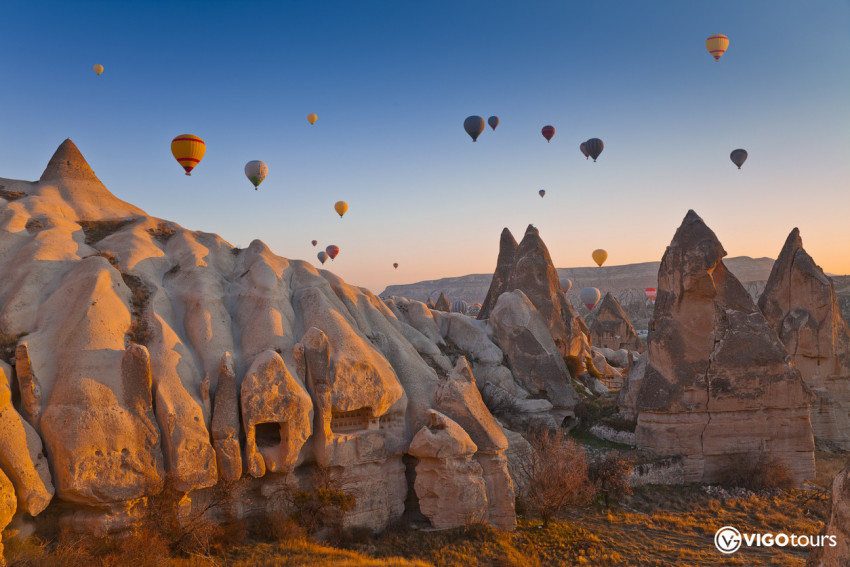 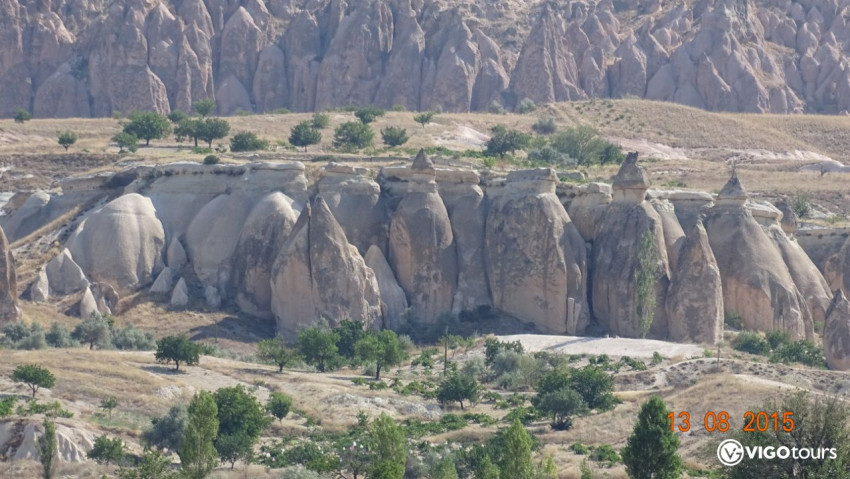 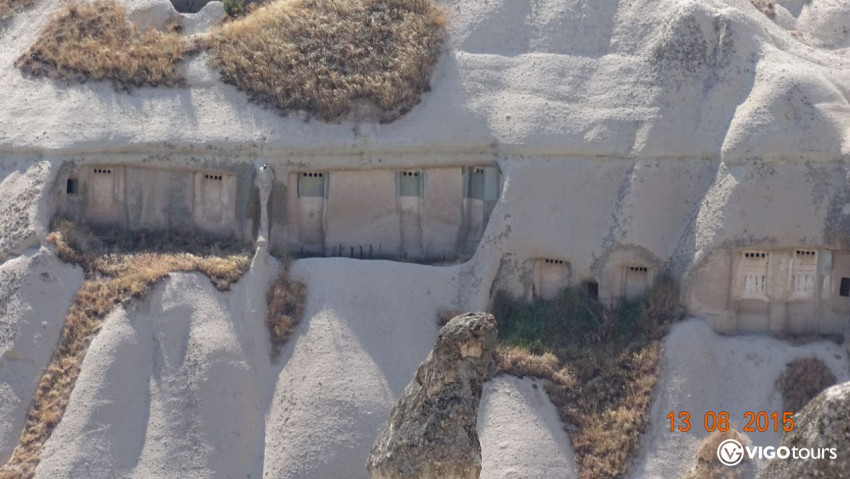 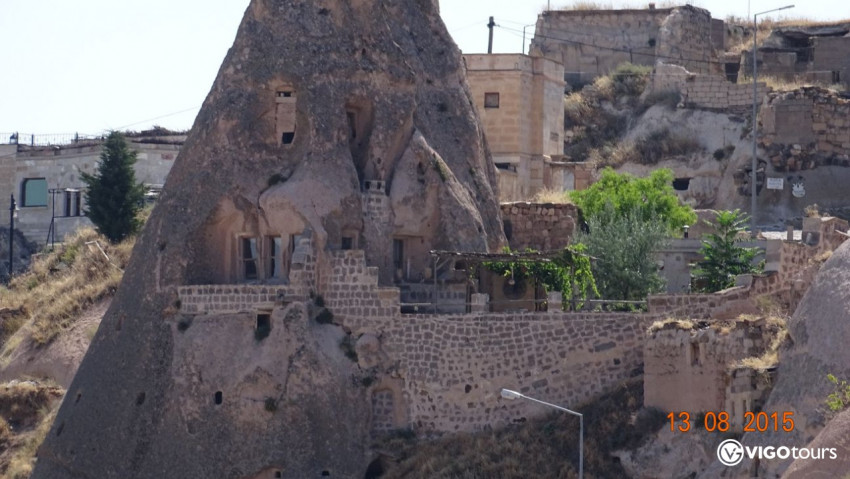 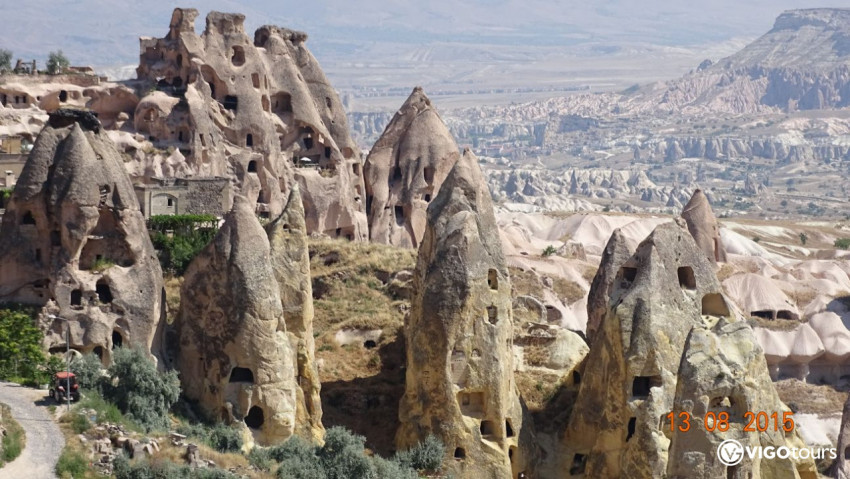 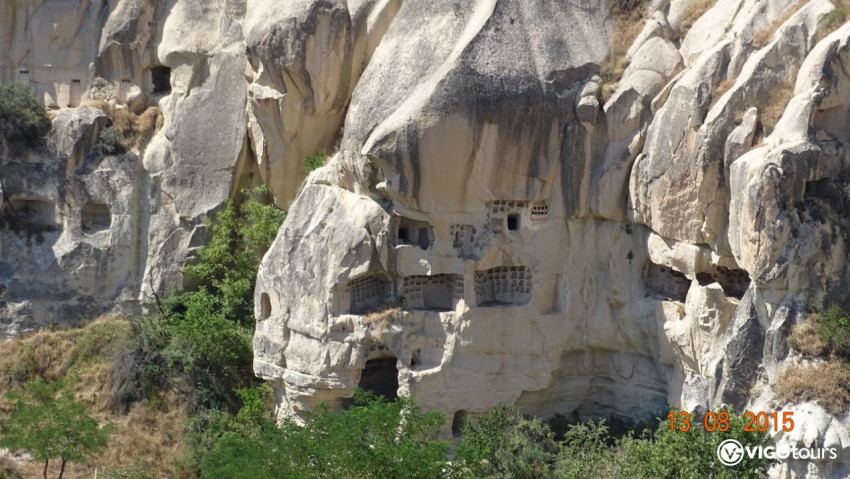 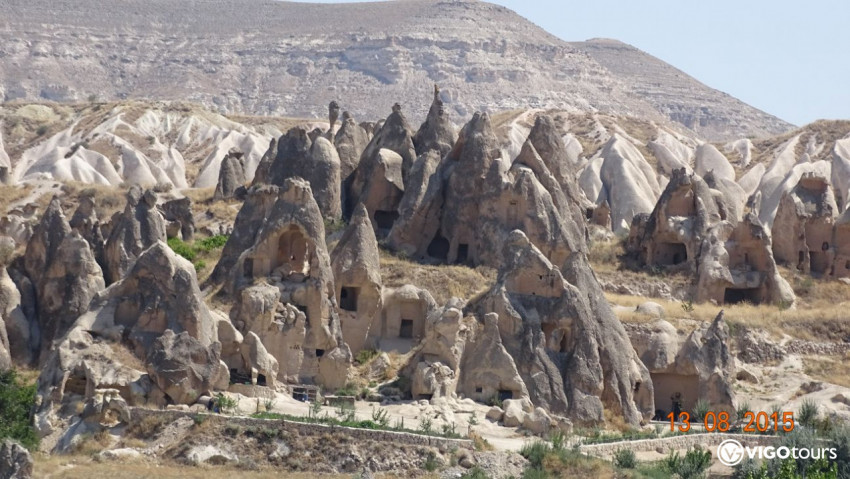 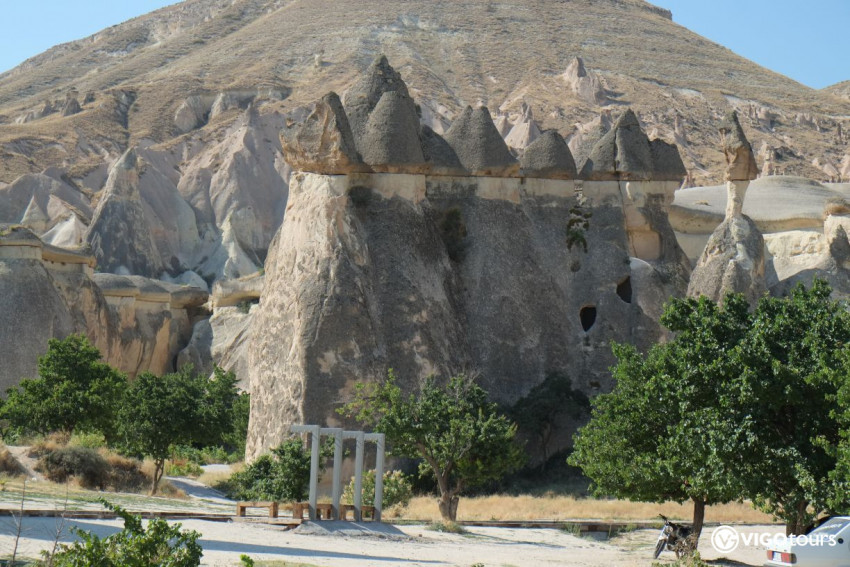 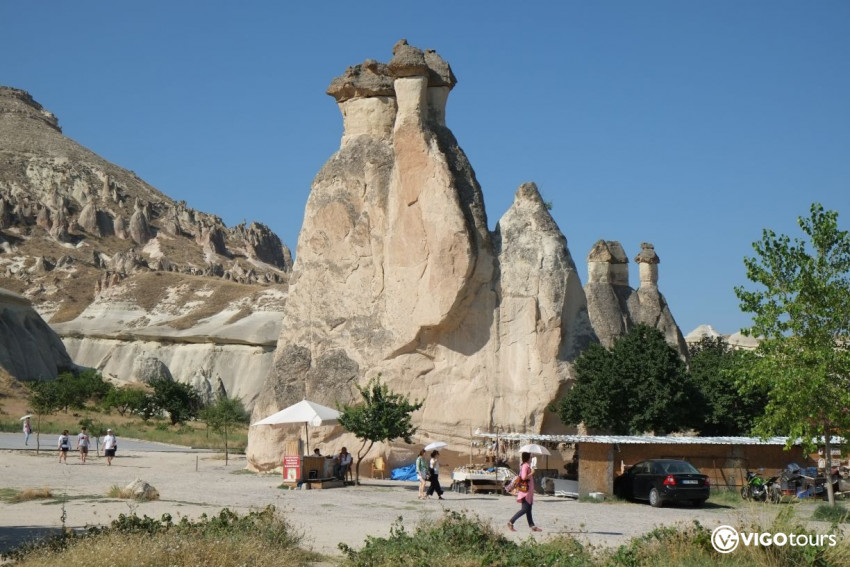 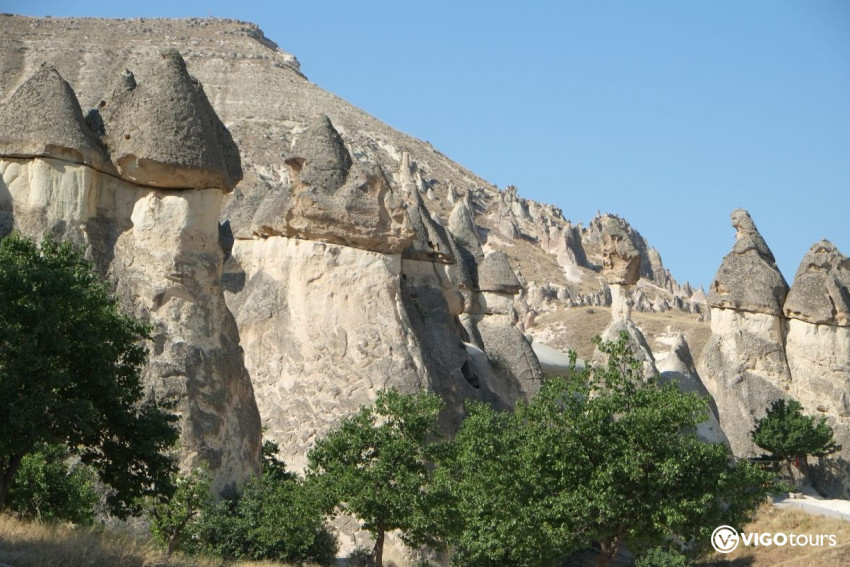 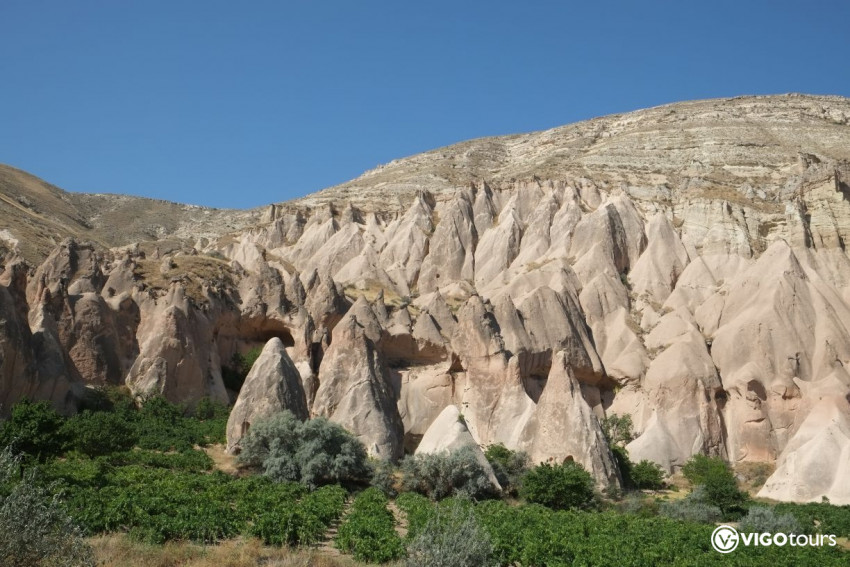 Cappadocia, the moon-view region in the southeast of Ankara in the central Anatolian region of Turkey, is visited by more than 2 million local and foreign tourists every year with its unique geological formations such as mysterious fairy chimneys, valleys and underground cities. Large, cone-shaped formations called fairy chimneys were formed over millions of years by the erosion of soft volcanic tuffs. Past cultures carved these natural formations to be used as houses and castles (such as Üçhisar Castle), and even astonishing cities such as Kaymaklı and Derinkuyu, which were completely underground, were also used as shelters from attacks by early Christians.

2-Day Cappadocia tour from hotels in and around Side

Take a wonderful 2-day trip from Side to Cappadocia and be amazed!

2-day trip to Cappadocia from Side region: Join us and see the magical valleys of Cappadocia!

See the unique Göreme open air museum with a 2-day trip to Side - Cappadocia!

Experience the extraordinarily amazing underground city with a 2-day tour of Cappadocia from Side!

Side: Join an amazing hot air Balloon tour on a 2-day Cappadocia trip

For the 2-day Cappadocia tour from Side, we do pick up and drop off from Side and all hotels around Side and this is included in the tour price.

For the 2-day Cappadocia tour from Side, the pick-up and drop-off from Side hotels is the main entrance gate of the hotels. Our tour bus cannot enter the hotel boundaries. The main entrance is where the security hut is.

Where are we staying in Cappadocia?
Alp Hotel, By Kapadokya hotel or Signature Garden Avanos. There may be another similar hotel, subject to availability.

"Hello! Looking forward to a trip to Cappadocia! I found your offer great, but could you please clarify a couple of points: - Could you please share with me the tour program? I am really interested in a sights list. - I would appreciate knowing possible hotel's names. - What is the price of balloon ride? Could you please get back to me on these questions by email? Best regards, Kseniya

Hello from VigoTours, Thank you for contacting us. You can see the tour program and sights list through the "read more..." button on the tour page. The hotel name is ByCappadocia. For the price of balloon ride is a little difficult to give a price idea. Balloon prices are changed daily. For instance if no flight happens of bad weather prices increase at first next available flight. Also if tourist traffic to Cappadocia goes up this makes prices goes up. On the first day of the tour, on the way to Cappadocia Our tour guide informs accordingly to everyone on the group about the price, and accept bookings. We wish you a pleasant holiday in Turkey with unforgettable holiday memories. Kind regards, Vigo Tours

Reply from Vigo Tours: Thank you very much for your review!

Cappadocia trip from Side Turkey

We booked a 2-day Cappadocia tour with Vigo Tours in our Side holiday. Cappadocia is an enormous place. The underground city is very interesting. The balloonning was incredibly gorgeous at sunrise. Everyone should experience this.

Pamukkale tour from Side via Salda lake

Excursion from Side to Kekova sunken city

Antalya aquarium from Side with transfer and ticket

Half day Fishing Tour in Side Turkey

Bird watching tour from Side Turkey

Fire of Anatolia dance show from Side