Excursion from Antalya to Perge Aspendos Side 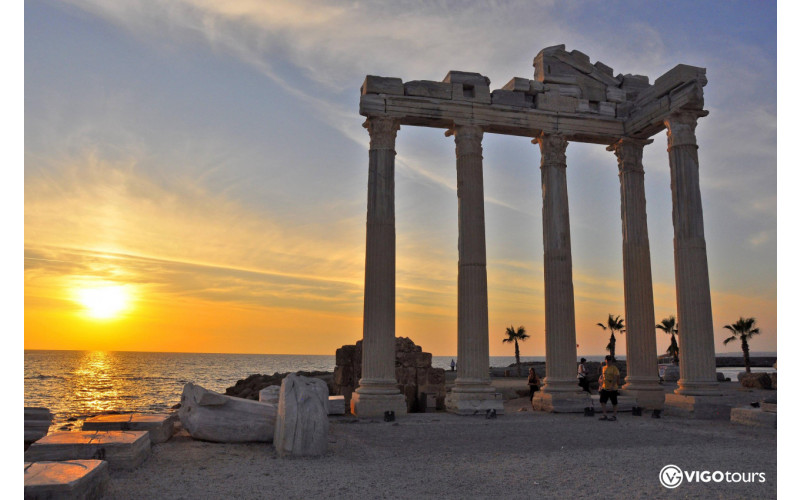 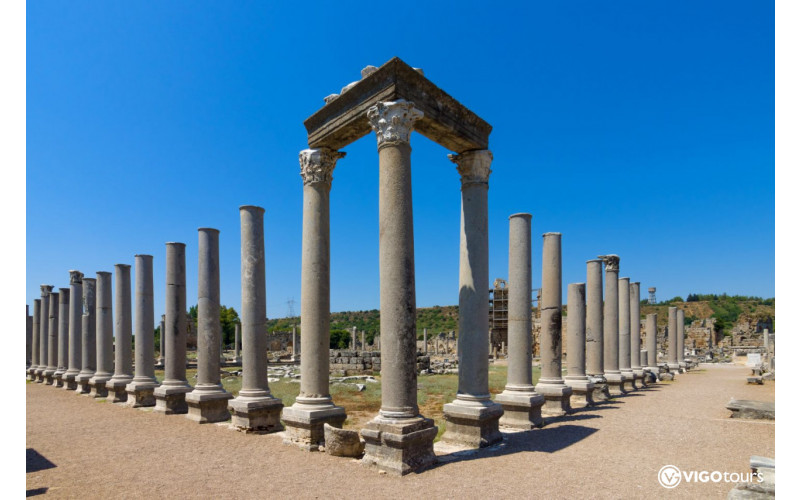 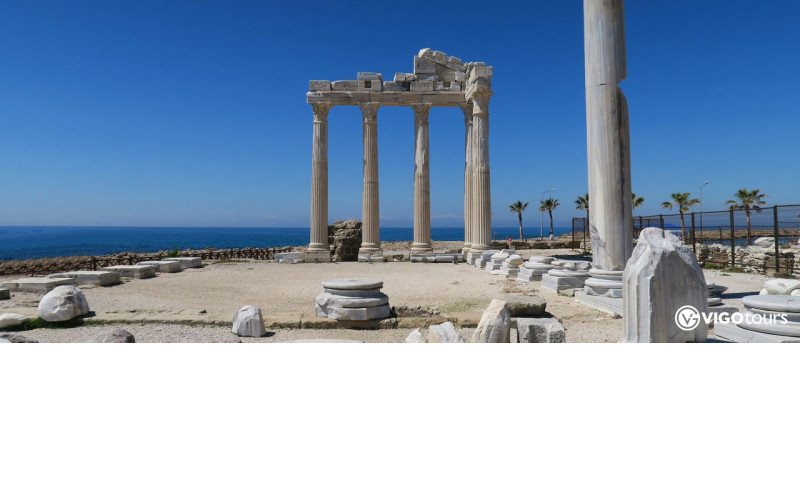 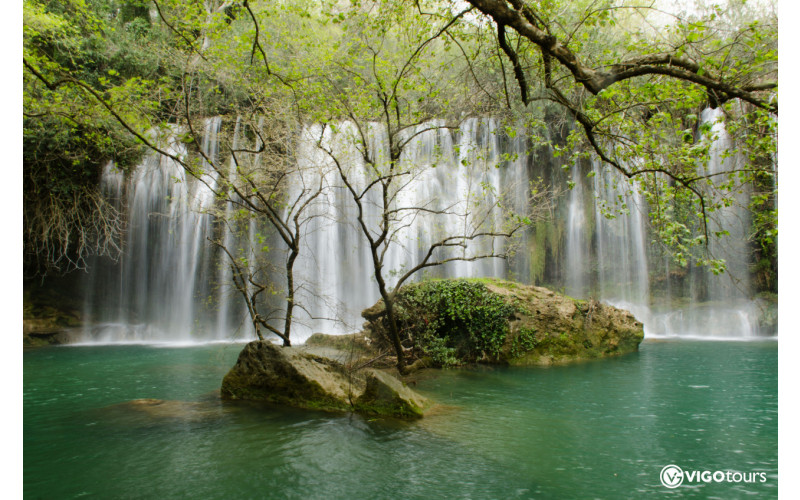 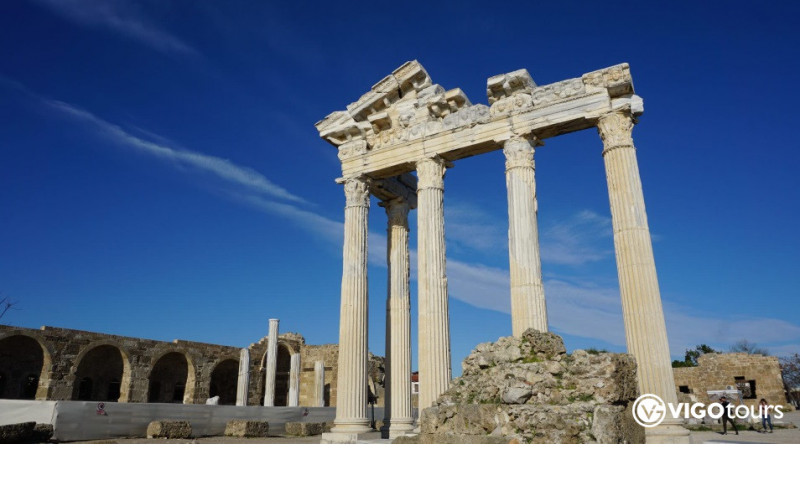 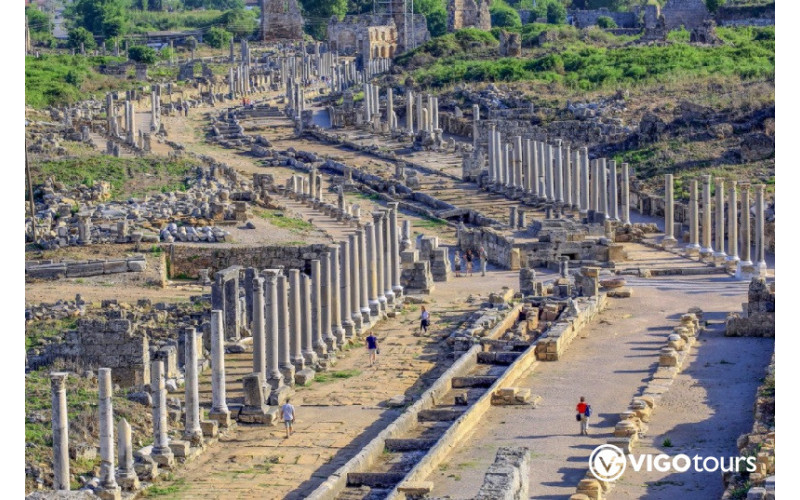 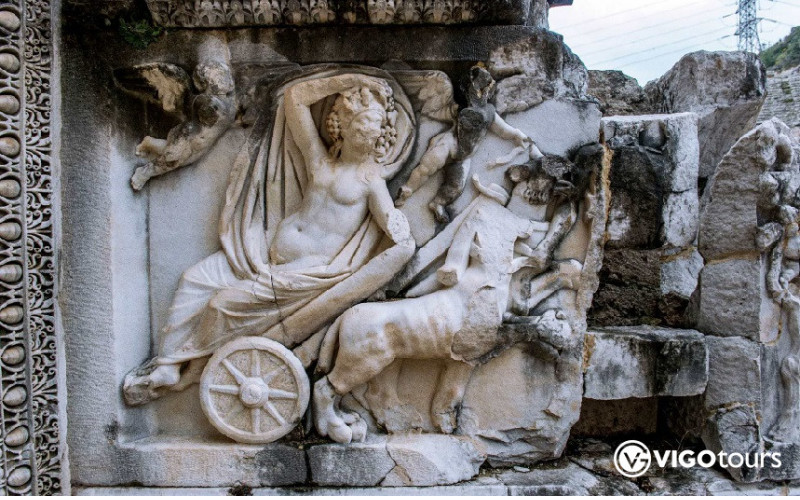 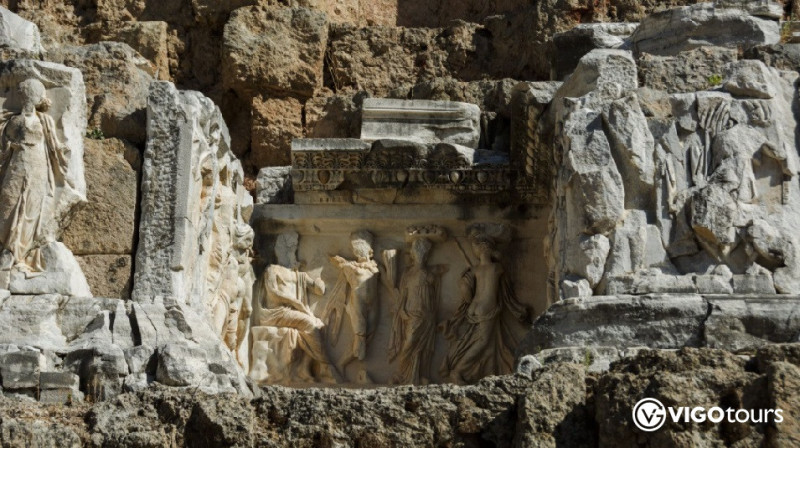 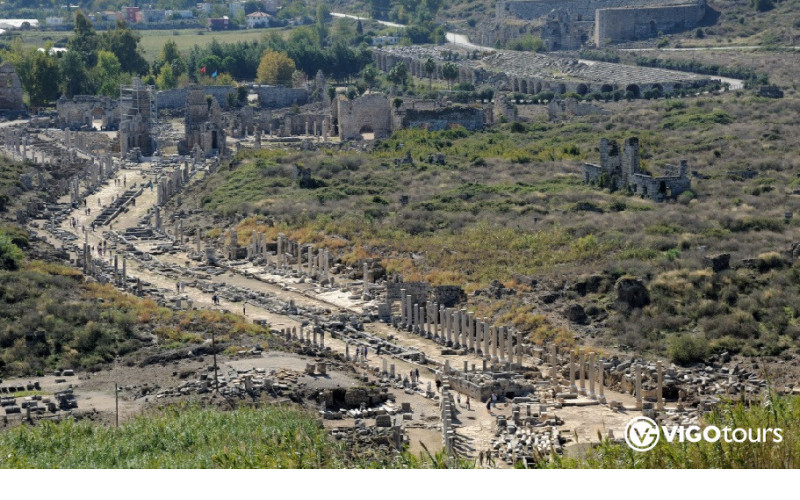 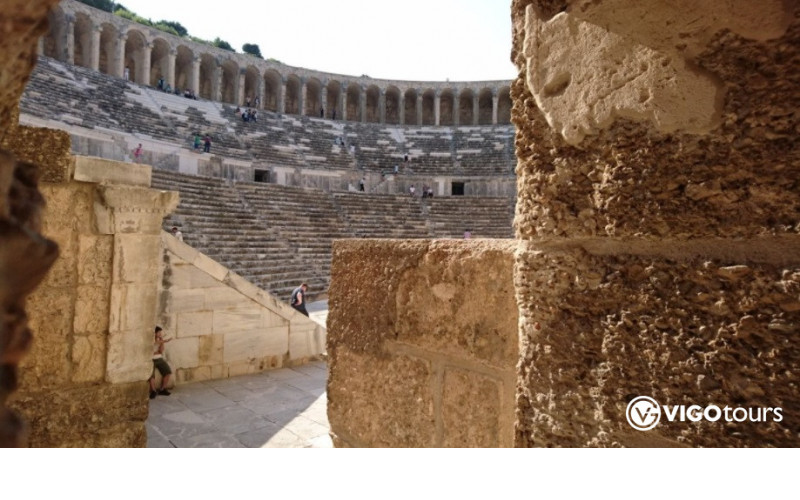 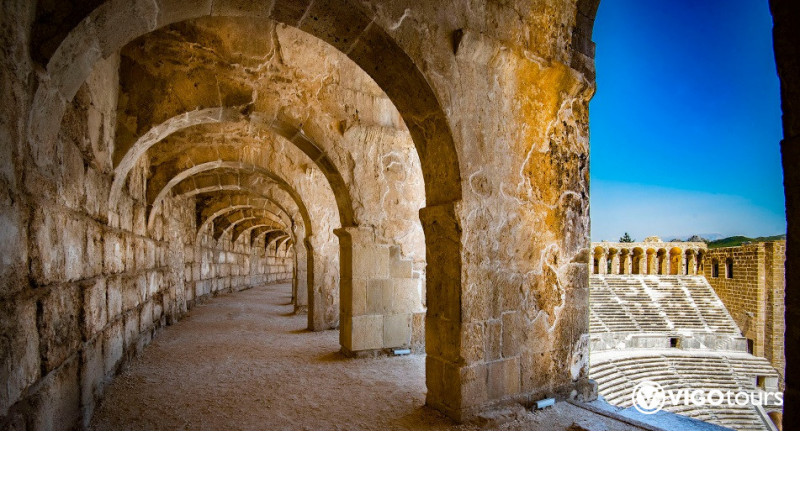 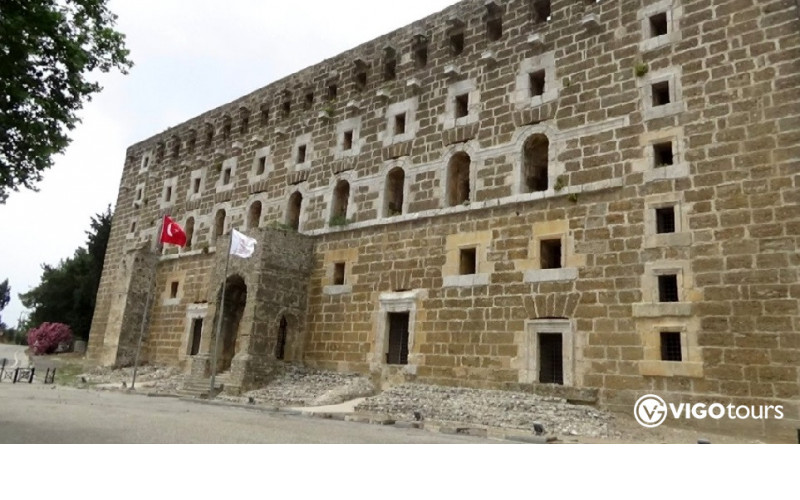 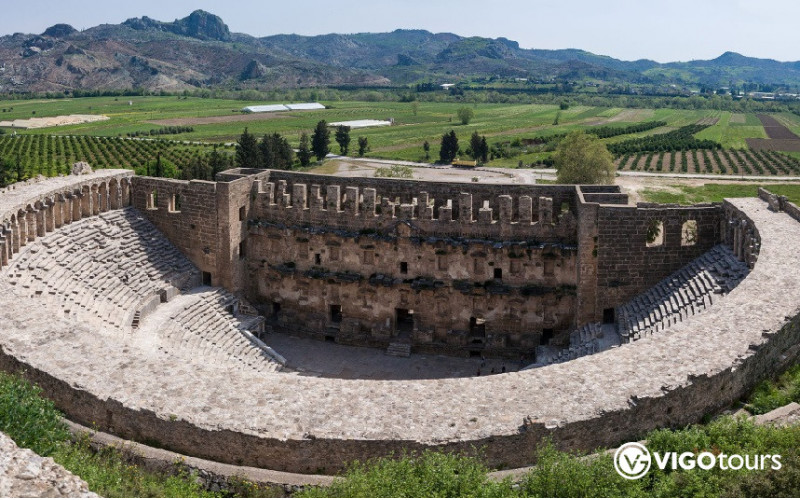 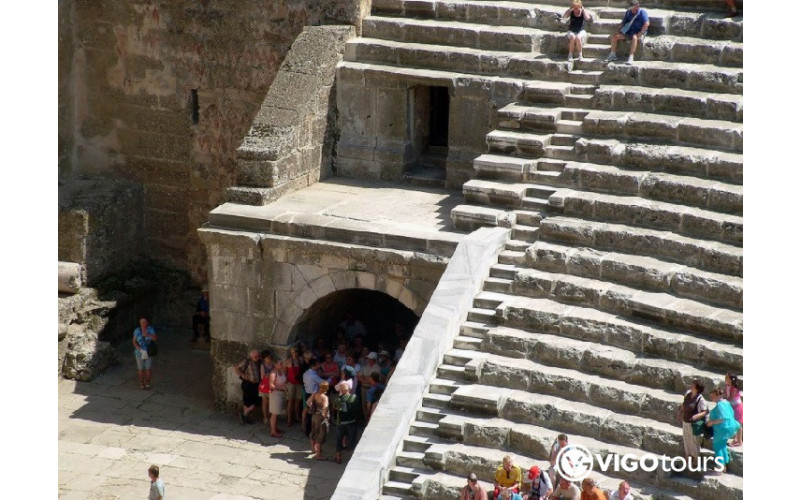 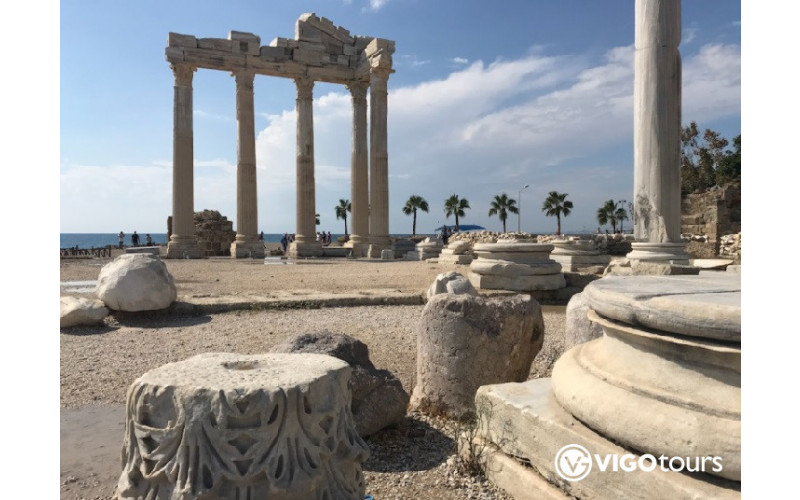 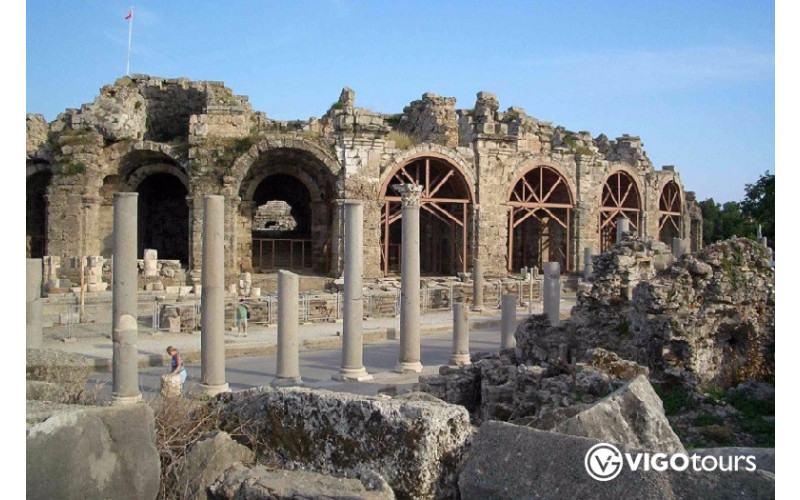 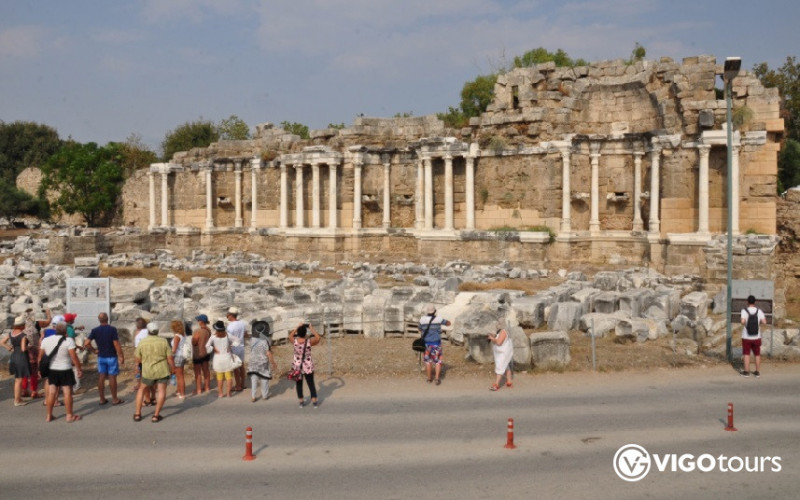 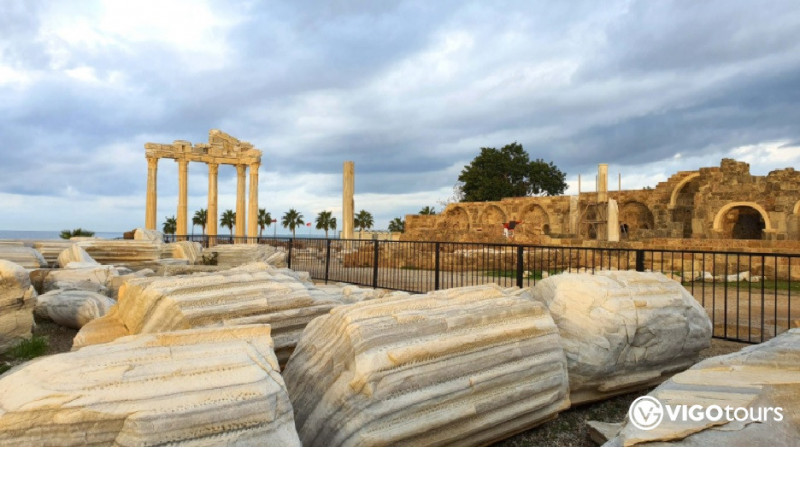 Antalya region is full of very rich ancient ruins to be seen, but it is quite difficult to see them without taking a guided tour. With this guided tour, you will be able to see world-famous ancient values such as Perge, Aspendos and Side. You will be picked up from your hotel in an air-conditioned bus and first explore the famous ruined city of Perge. Afterwards, you will see the magnificent Aspendos ancient theater and wander around the Aspendos theatre. Afterwards, you will visit the 2,000-year-old ancient port city of Side and get information from your guide. Before the tour ends, on the way back, you will visit the Manavgat waterfall or Kurşunlu waterfall, depending on the water level in the waterfalls.

Perge, Aspendos and Side tour from Antalya

Perge, Aspendos and Side: A Journey Through Time!

Join us on this tour of Turkey's most iconic ancient cities: Perge, Aspendos and Side! Spend an entire day unraveling the history of these three historic settlement sites, each with its own unique story to tell. Take a journey back in time as we explore these captivating sites and learn their centuries-old secrets.

See some of the most iconic cities in Antalya during a full day guided tour to Perge, Aspendos and Side. On this memorable journey you will visit three extraordinary ancient cities that boast world-renowned heritage sites - dating back hundreds of years. It’s a unique opportunity to explore Antalya’s rich cultural past!

This excursion is a fascinating journey back in time, a chance to explore the famous ancient sites of Perge, Aspendos and Side - three of the most significant archaeological sites in the world. Experience history firsthand as you visit these extraordinary ruins, learning all about their stories and marveling at their breathtaking architecture.

A great choice for those eager to explore Antalya's history, a day tour of Perge Aspendos and Side offers an escape from crowded sightseeing spots. A chance to relax with a tasty lunch at a local restaurant also awaits before the journey continues onto the ancient city of Side. Here, breathtaking views of the Mediterranean Sea provide the perfect photo opportunity!

Located within the Aksu district of Antalya city, the ancient city of Perge has a long history tracing back to the Hittites. Aspendos, an important city in Anatolia during Roman times, is renowned for its exquisite architecture and stunning marble sculptures. These excavated artefacts have made Antalya’s Museum a must-visit destination for anyone looking to explore the ancient ruins of this remarkable side of Turkey.

Perge, Aspendos and Side are three examples of the many ancient cities that have been well-preserved throughout Anatolia. Aspendos is renowned for its excellent conservation of its Roman period theatre, which is one of the best in the Mediterranean region.

Perge and Aspendos, two of the major cities in ancient Pamphylia, each featured a unique theater. The theater of Perge dates back to the 5th century BC and is known for its impressive portico that is said to have been damaged by an earthquake in 51 AD. Meanwhile, the Theater of Aspendos was constructed during the time of Emperor Marcus Aurelius (161–180 AD) using architectural features and construction techniques seldom seen today. It still stands today as a remarkable example of Roman-era theaters.

We will have Lunch in Aspendos.

After lunch we will drive to Side.

Side, the richest and most important port city of Pamphylia in ancient times, was founded on a 350-400 m wide peninsula, 80 km east of Antalya and 7 km southwest of Manavgat.

Perge and Aspendos are both important ancient cities located in Pamphylia. Side dates back to the 7th century and was a part of the Lydian Kingdom until 546 when it came under the rule of the Persians. During this period, Side was able to retain some level of autonomy and even minted their own coins. In 334BC, during Alexander the Great’s Anatolian conquests, Side opened its doors without resistance and became one of his most important coin-producing centers.

Three of the most famous ancient sites in Turkey are Perge, Aspendos, and Side.  The Temple of Apollo at Side is renowned for its architectural beauty and served as an important symbol of Roman peace. Named after the Greek god of light, beauty and art, it was dedicated to Apollo and remains a popular attraction today.

Main entrance gate of the hotels (not the lobby or reception) Antalya Kaleiçi (Old Town of Antalya) Hotels: Meeting and pick up from McDonald's next to the ancient Hadrianus gate.

A Wonderful full day guided tour from Antalya to Perge, Aspendos and Side, with pick up from all the hotels in and around Antalya city, and lunch included.

Manavgat waterfall is visited instead of Kursunlu waterfall.

Tour program for a memorable full day guided tour from Antalya to Perge, Aspendos and Side, with pick up from all the hotels in and around Antalya city, and lunch included

We went as part of an organized trip to Aspendos. It was a bit of a strange feeling in such an old theater (the kind you see in old movies). walking up the stairs was brilliant and the architecture was quite spectacular. It was good to walk through all the tunnels and sit on the stairs / seats! PLEASE DO NOT go and see the camels that are outside. Our guide explained us that they are there all year round and not properly fed and watered. They also lie on hard ground all year round, which has damaged their legs. Camels have nothing to do with this place!

Excursion from Antalya to Perge Aspendos Side

2 Day Trip to Cappadocia from Antalya

One day trip from Antalya to Jerusalem Israel