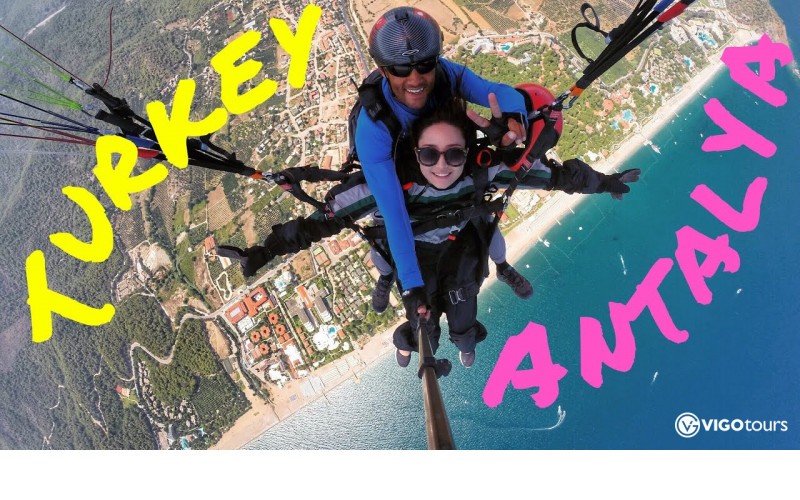 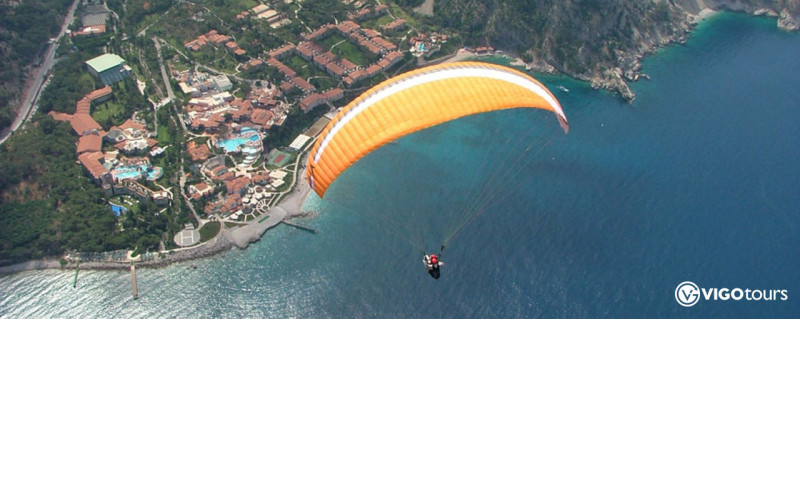 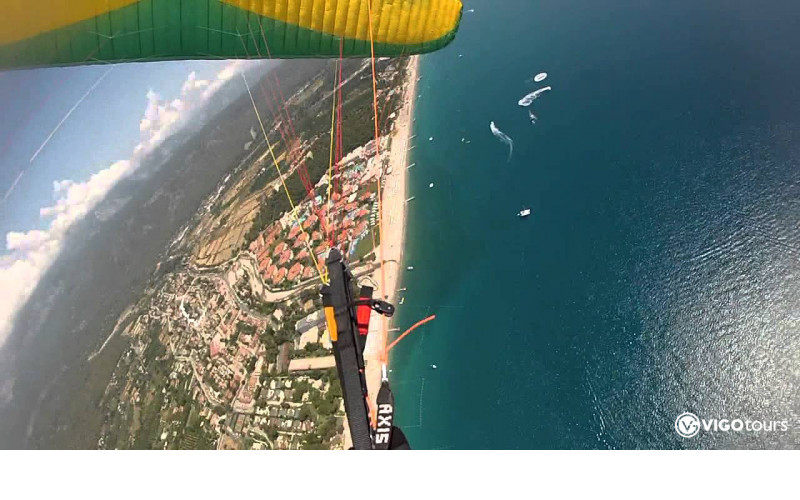 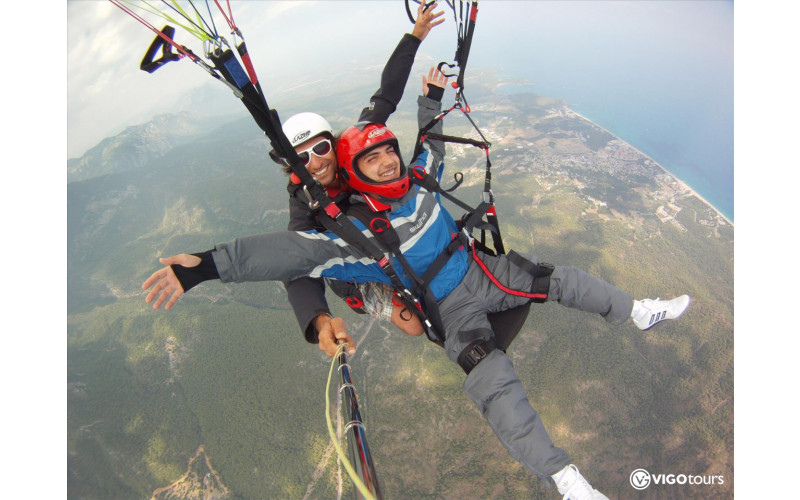 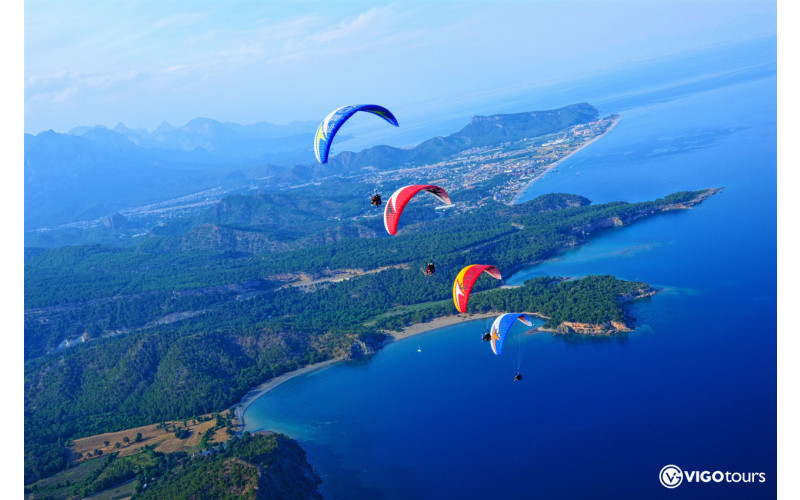 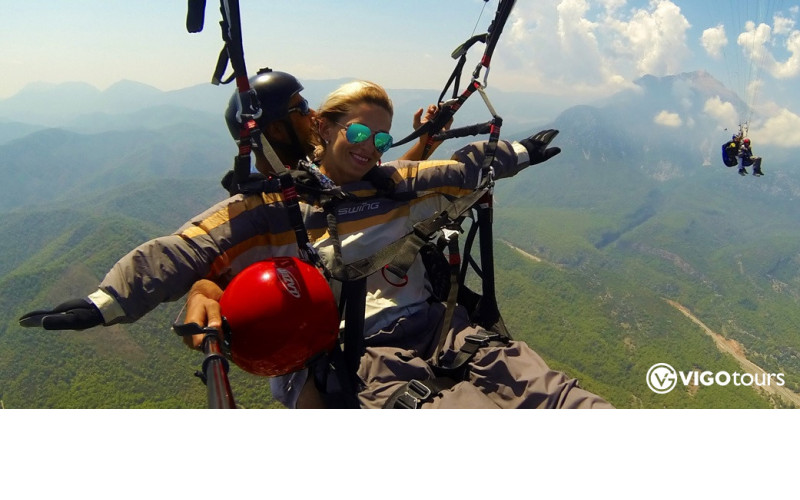 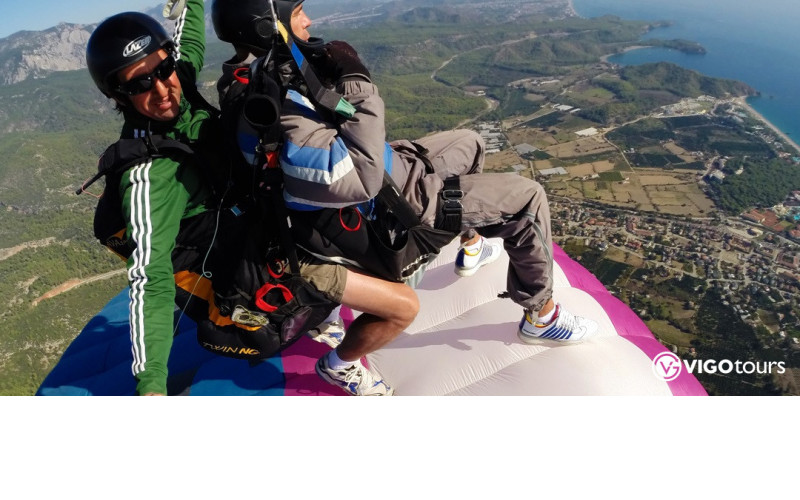 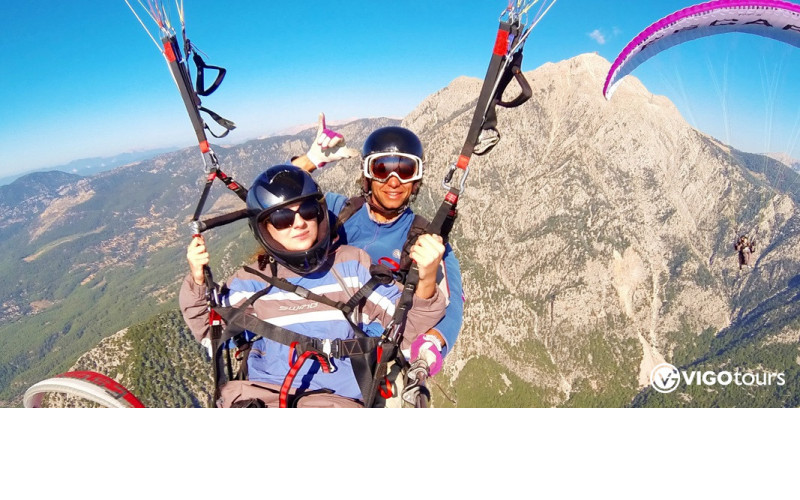 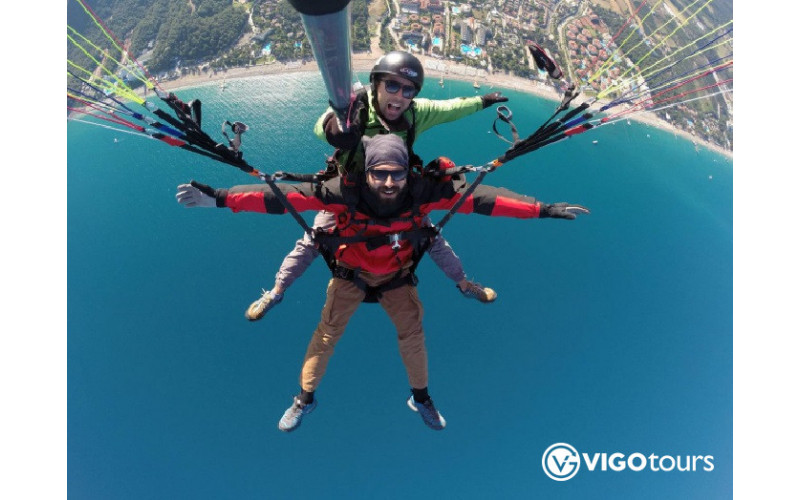 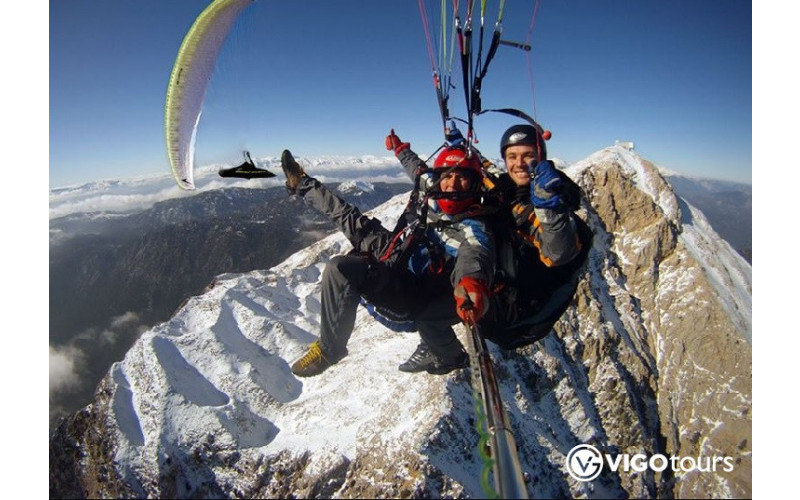 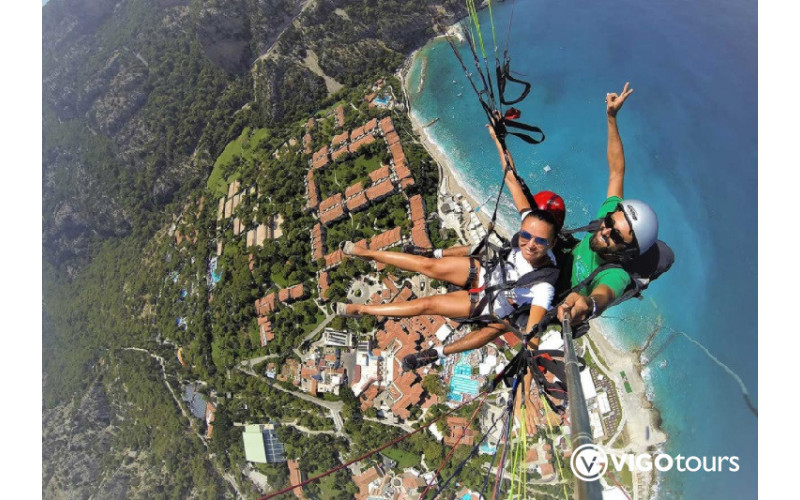 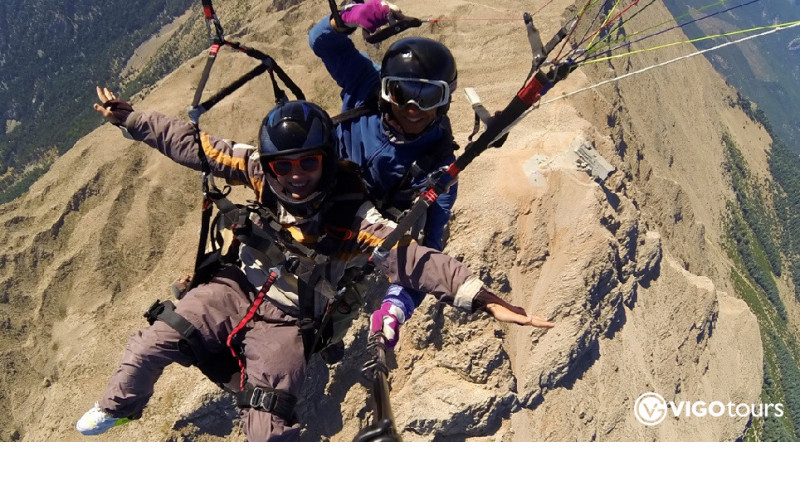 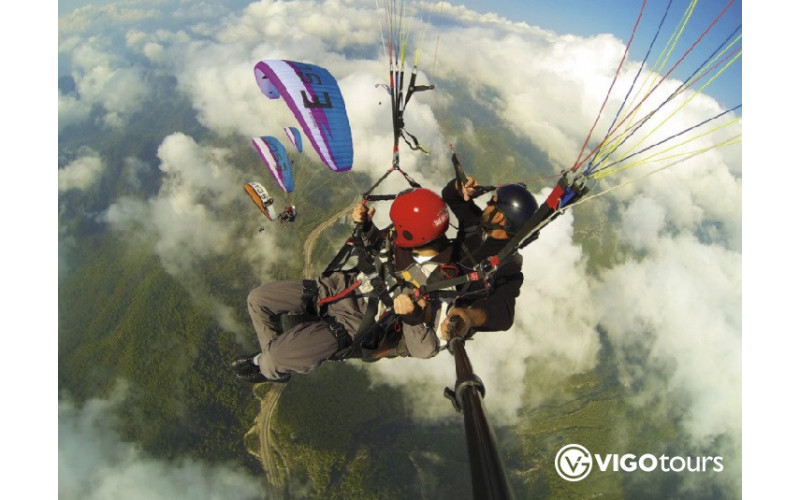 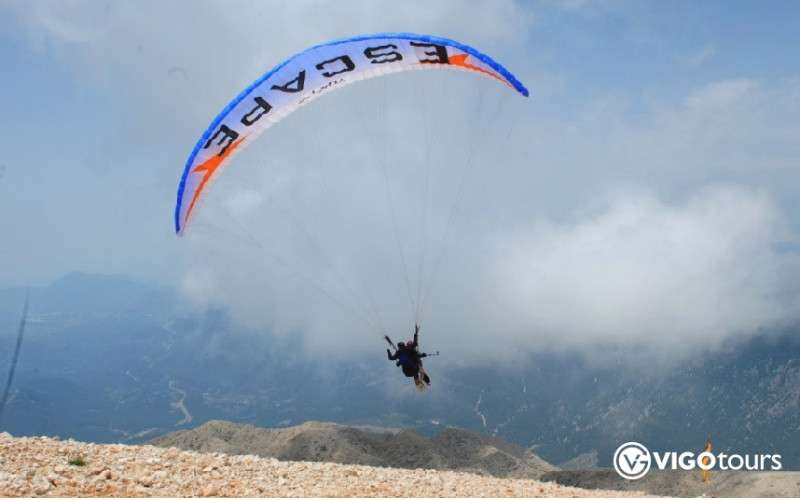 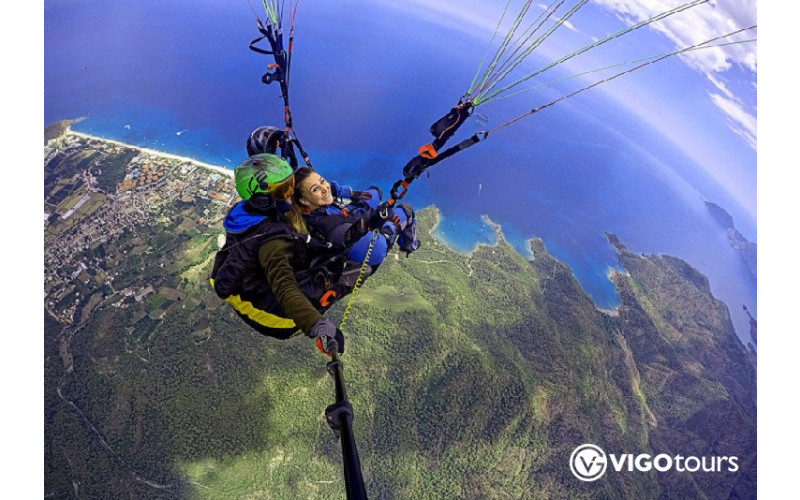 Mount Tahtali is the highest mountain closest to the coast and the highest alpine paraglider facility in the world. The altitude difference between its landing points is 2,365 meters.

Prepare yourself for an unforgettable and exciting flight: Tandem Paragliding from Mount Olympus! Mount Olympos is among the top 5 in the world for paragliding!

An adrenaline filled flight from 2365 mt awaits you!
from Olympos mountain of Antalya You will love so much your paragliding flight.

For a paragliding experience from Olympos Mountain, after a safe connection to the paragliding under the control of your experienced pilot, it is enough to run a few steps forward. The flight takes about 40 minutes.

For tandem paragliding flights, only a 10-minute lesson and information is sufficient for the first-time passengers. Your pilot is in full control of the flight and you will only enjoy flying in the sky. Isn't it worth trying?

Anybody under 110 kg can fly tandem. All you need is to be able to run for regarding 5 meters.

The weather is closely monitored by an experienced team. However, if the flight is not possible due to sudden changes in weather conditions when you are at the summit for a paragliding flight, 49 € is not refundable as a roundtrip cable car and transfer fee.

It doesn't matter if you have mastery of paragliding or want to enjoy a flight. Flying through a paragliding from Olympos is a true divine adventure.

The white dot seen in the pictures above is the peak of Tahtali Mountain and the paragliding flight from here cannot be explained.

Thanks to the paragliding flight from Tahtalı, you will not only watch the natural scenery from Alanya to Kas, but you will also have the opportunity to explore many wild life on the Tahtalı and Bey Mountains from the sky.

Tahtali Mountain is the name of a part of the Taurus Mountains and extends along the borders of Antalya - Kemer district.

Paragliding with the paragliding from the summit of the Taurus Mountains to the beaches of the Mediterranean glide like birds in the air, you can experience the privilege of watching the embrace of the green and blue tones of nature from the sky.

Today, the number of people doing this sport is increasing in every country of the world. Because unlike the free parachute, paragliding is possible to float (even rise) in the air for hundreds of kilometers and fly for hours. It can also be prepared in just a few minutes before take-off, and can be collected immediately after landing and sized to the size of a backpack. And most importantly, basic flight skills can be gained with only a few weeks of training.

On arrival you'll get a short briefing after which be ready to have unforgettable paragliding expertise. A skilled tandem pilot will management the speed of the flight and you may benefit from the beautiful views over Antalya, turquoise sea and beautiful mountains. The pilot will take great pictures and videos that are elective to purchase after the flight. There’s no expertise essential, as you’ll fly with knowledgeable pilot, so you possibly can think about admiring the views and making sure you seize the perfect up-in-the-air photo. Have you ever dreamt of hovering though the sky or questioned what it is wish to fly like a bird?

For Tahtali paragliding, pick-up and drop-off from Antalya hotels is not included. The meeting place is the Olympos cable car cable car lower station. Meeting time will be given after booking.

The meeting place is Tahtali cable car lower station. Details about meeting time will be given after booking.

Paragliding from the summit of Tahtali mountain

For paragliding, all participants are required to submit a passport after booking and just before the flight.

Meeting time for paragliding from Tahtali Mountain will be informed after booking. For Tahtalı paragliding, pick-up and drop-off service is not provided from Antalya hotels. The meeting place is Tahtali cable car lower boarding station. At the lower station, the paragliding officer will welcome our guests and ensure that they ascend to the 2365 meters summit. The paragliding table at the summit carries out the flight operations and ensures the start of the flight. Paragliding landing place is Tekirova coast. The flight takes approximately 40 minutes. In the office located on the beach, photos and videos are watched and bought.

I experienced a great paragliding from a very high mountain point. We went to the top of the mountain by cable car with amazing views and paragliding was amazing.

Antalya aquarium with transfer and ticket