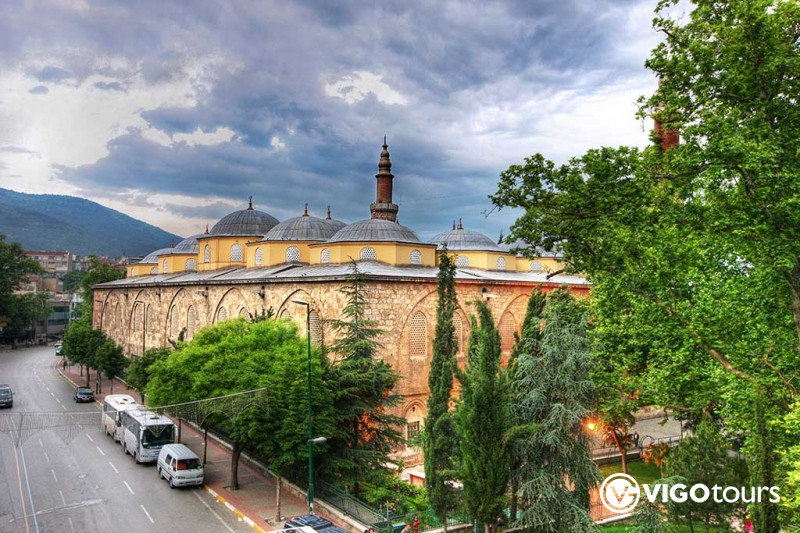 Day trip from Istanbul to Green Bursa
Being the first capital of the Ottoman Empire, with the world-famous ski resort Uludağ, with its insatiable chestnut sugar and its magnificent history.

Bursa: Silk production started in the region around 555 AD and a small spa town was established due to the richness of natural hot water resources.

City of Bursa (Green Bursa)
The city of Bursa is located in the southern part of the Marmara Region. Bursa, which has a coast of approximately 20 km in the Marmara Sea, has a population of 2,901,396. The city has an area of ​​10,882 km2 and the population has increased considerably in recent years.

Green Bursa (1326), which was the first capital of the Ottoman Empire and has always been an important city center since then, dates back to ancient times.

Bursa has been named as 'Green Bursa' because of the abundance of greenery in the city. There are many things to see in this city. It is a center that attracts the attention of tourists with its historical places, camping areas, ski center, quaint towns and quiet villages.

In addition, one of the important beauties in Bursa is to take the 9 km long cable car and enjoy the nature view is a type of excursion that you will not see in many countries or cities.

İnkaya village and 600 years old İnkaya Plane Tree
Incaya village is one of the first villages of the Ottoman Empire.

Uludag Mountain and Ski Resort
Uludağ Ski Center is located on 2 hills, Fatintepe and Kuşaklıkaya, in the southwest of Bursa. Uludağ ski resort has a national park of 11 338 hectares. It is half an hour away from Bursa city center.

Uludağ Ski Center, declared as a national park in 1961 and located 36 km from Bursa city center, is the center of the country's winter tourism with its modernity and quality. The ski center, which starts with an altitude of 1800 meters, has ski resorts up to 2200 meters altitude and has a peak at 2543 meters, and receives visitors from both our country and many countries of the world for 12 months.
.
Green Mosque
This mosque, located in Yeşil district, was built in 1419 by Çelebi Sultan Mehmed. "Inverted T" letter that the mosque was built with the architectural design Green Mosque, Bursa, Turkey, just as it is one of the most beautiful historical buildings. The architect of the mosque is Hacı İvaz Paşa. Some Byzantine building materials were also used in the building. The structure was covered with domes and the walls were built with cut stone. The last congregation site was considered but not made. There are also allegations that the building was built as a government agency.

Bursa Cable Car - The longest of the roped roads in the sky
With 140 cabins, each of which can accommodate up to 8 people, it can carry 1500 passengers per hour and is the longest ropeway in the world with 9 kilometers. Cabins come in every 20 seconds.

On this wonderful full-day tour, we cross the Sea of Marmara and go to Bursa, the first capital of the Ottoman Empire. See the traces of the Seljuks and the Ottomans in the city of Bursa and taste local foods. See typical local bazaars, wander the ancient historical silk bazaar, watch local handicraft makers. Admire the wonderful natural scenery as you climb to Mount Uludağ (2543 mt) with the Bursa cable car. Enjoy a great lunch in Uludağ.

For the full day tour to the old ottoman capital city Bursa city from Istanbul, Pick up is available from centrally located Istanbul hotels. Pick-up and drop-off from hotels far from the center and the airport is subject to an additional charge. Pick up from hotels in anatolian side of Istanbul is not available.

This tour includes a visit to the production center of sweet products unique to the city of Bursa. Shopping is possible.

Lunch:
Main course: Doner kebab with chicken or meat
and desserts such as baklava and other traditional Turkish dishes.

I need to book for 2nd Oct. I will have my Wife & a 9months daughter. So, will I have to pay for 2, right? Please let me know if the tour is available at the earliest. Thank you!

Hello from Vigo Tours, Thank you for contacting us. Due to Corona, and not enough tourist traffic, we have difficulties in carrying out many tours. Daily Bursa tour from Istanbul is one of them. It is not possible to predict what the situation will be for the beginning of October, but we are taking our note and will inform you immediately when there is any positive news. We wish you a wonderful holiday in Turkey with unforgettable holiday memories. Kind Regards, Vigo Tours