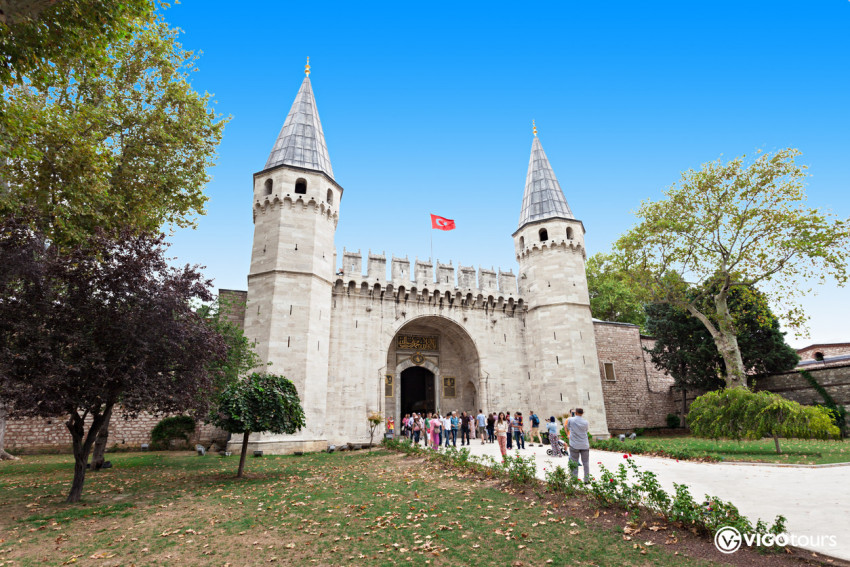 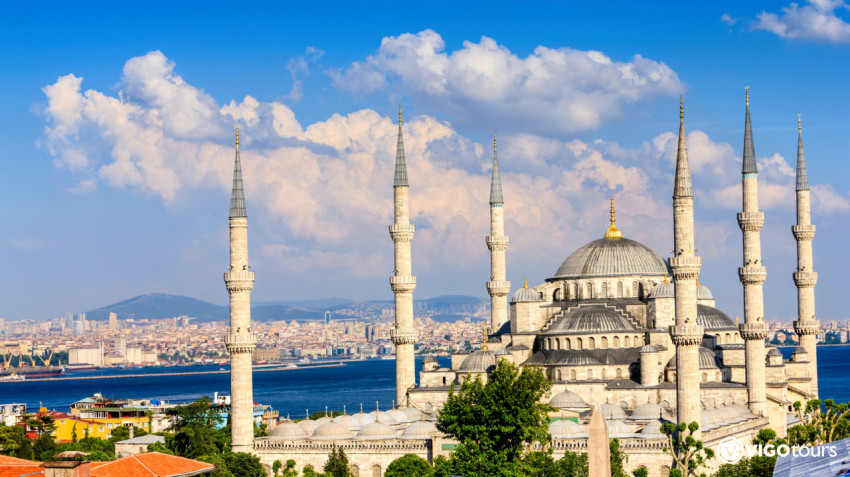 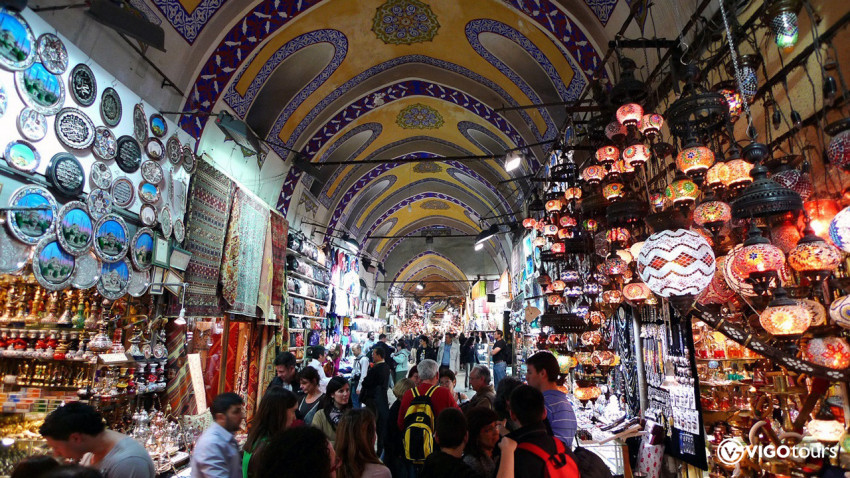 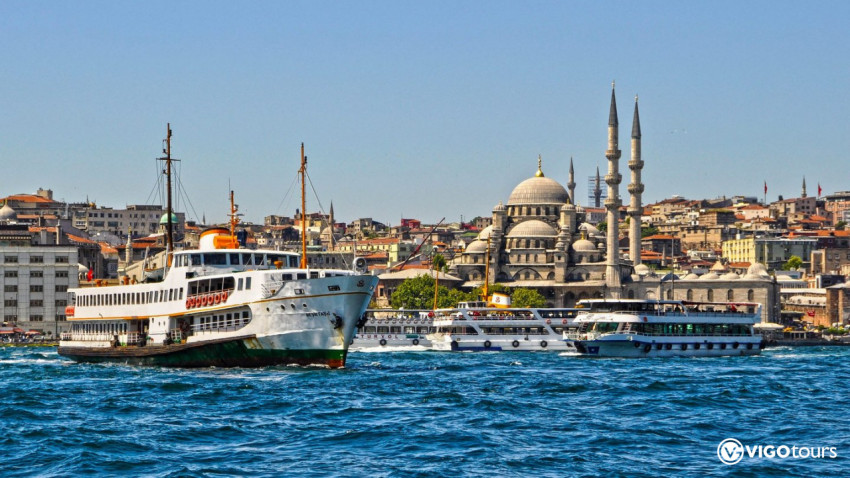 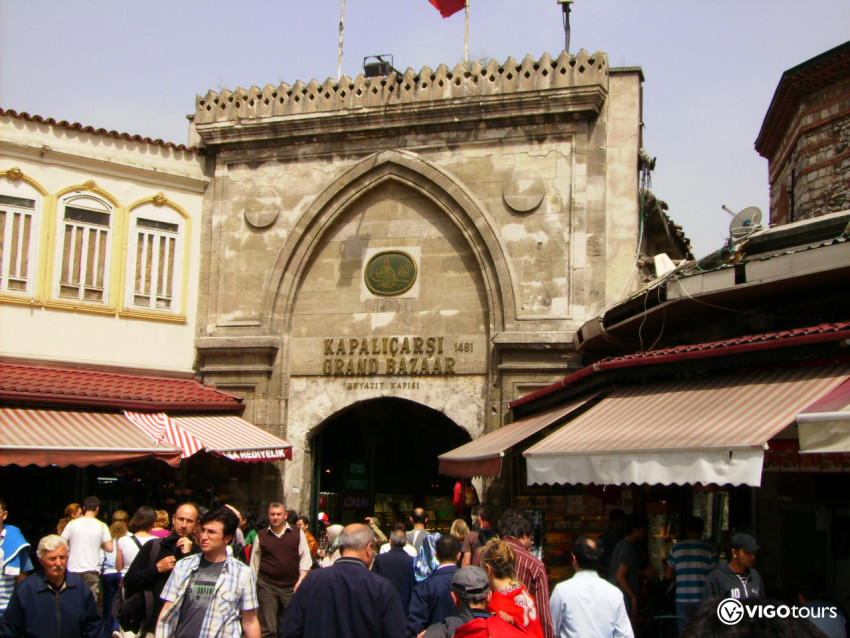 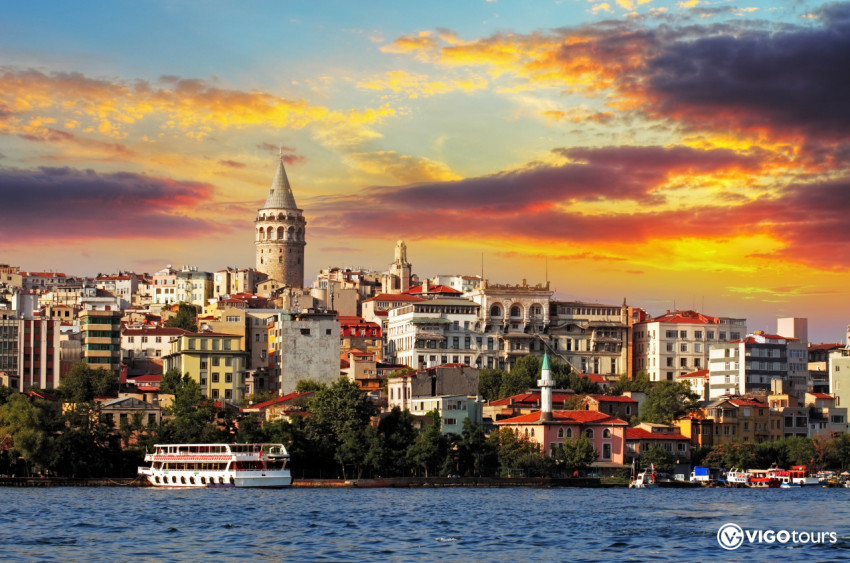 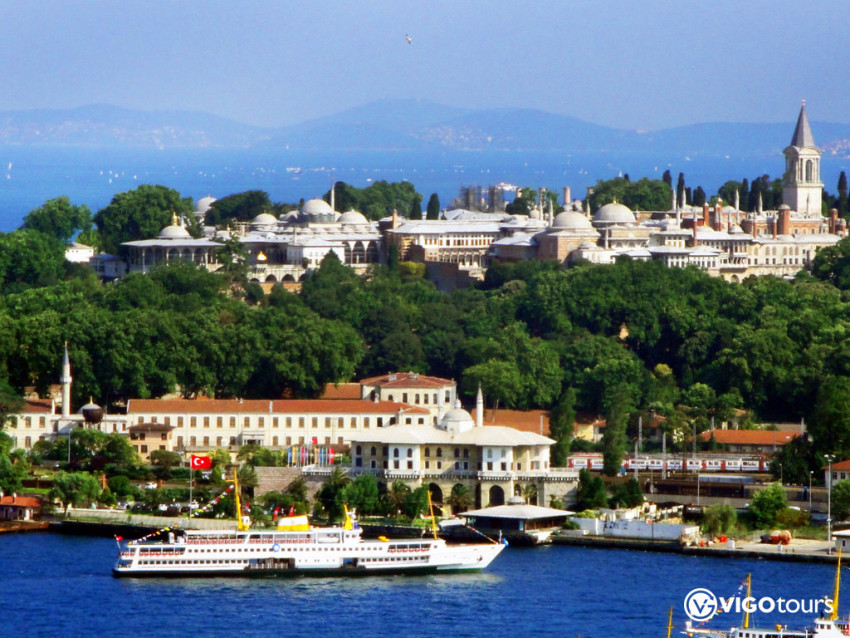 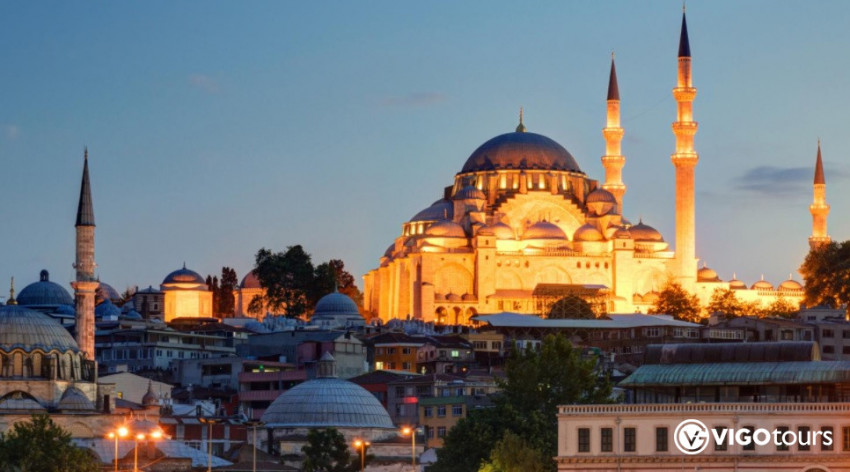 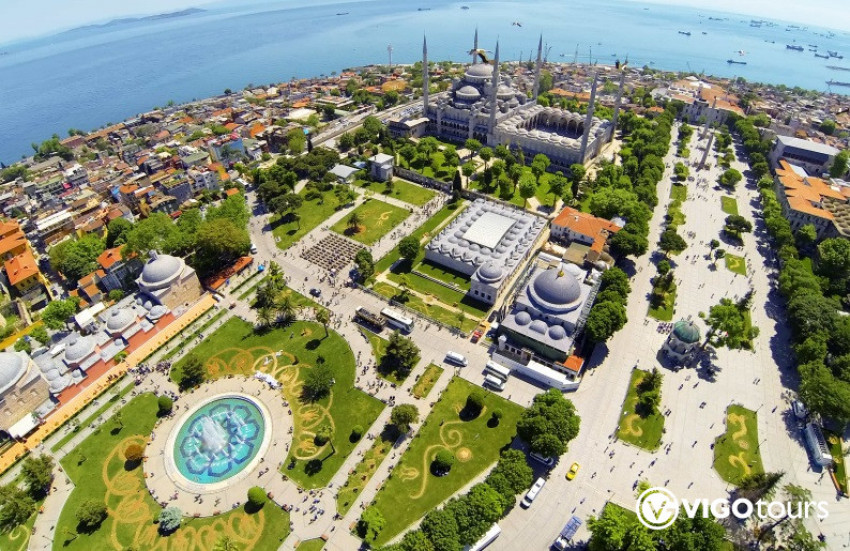 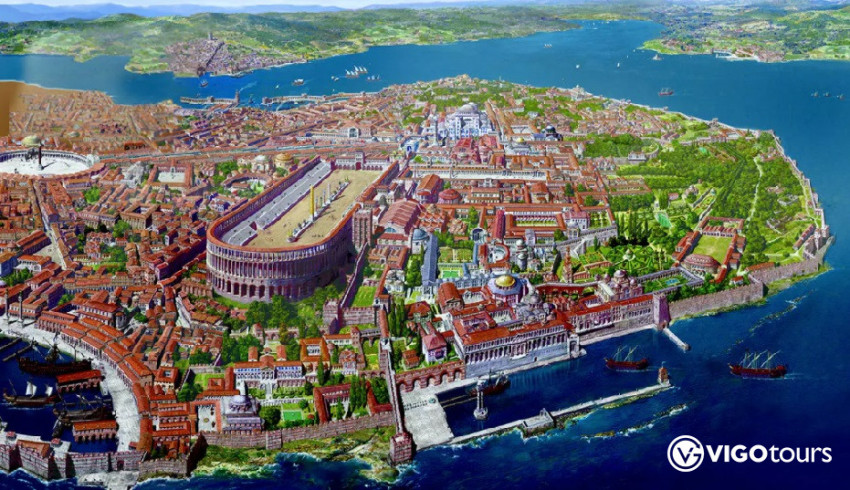 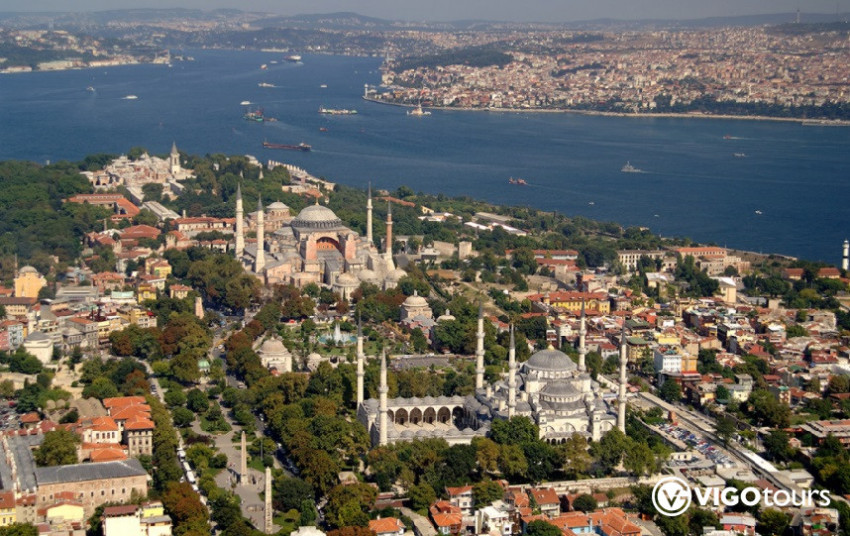 Istanbul City Tour: Topkapi palace, Hagia Sophia and much more - Vigo Tours Istanbul. Istanbul, an Asian and European city, has fascinated every visitor with its every corner for hundreds of years. Istanbul, the master of cities, is a unique beauty with hundreds of excellent buildings from the depths of history.

Byzantine and Ottoman antiquities of Istanbul

Istanbul city tour with Topkapi palace, Hagia sophia, Blue Mosque and the other historical places at the historical peninsula of Istanbul.

In this full-day Istanbul city tour, we will visit Istanbul's 4 most important historical values, the unique Hagia Sophia museum, the magnificent Blue Mosque, the 600-year-old covered bazaar and the Topkapi Royal Palace, the master of palaces. We will also see the Hippodrome.

Sultanahmet Square is also named after the Blue Mosque. This valuable structure is one of the most important works that were presented to Istanbul during the Ottoman Empire. The Blue Mosque was built by the Ottoman Sultan Ahmet I between 1609 and 1616. The most typical example of classical Turkish art is the first mosque originally built with 6 minarets. The dome, which is one of the most important elements in all Ottoman mosques, is much more magnificent in the Blue Mosque. The main dome is 43 meters high and 23.5 meters in diameter. The architecture of the Blue Mosque has become a great result of the combination of Ottoman and Byzantine church architecture with 200 years of experience. Although there are inspirations from the Hagia Sophia, Islamic architecture is also known and is known as the magnificent work of the classical period. As a architectural structure, the Sultanahamet Mosque has been put into a fresh atmosphere thanks to 260 windows placed very skillfully. Due to the way the windows are placed, the large dome looks like it hangs in the air.

The most important monument of Istanbul that has survived from the Byzantine period is undoubtedly the Hagia Sophia, which is considered the eighth wonder of the world and the most magnificent work of Byzantium. Hagia Sophia, the work of Emperor Justirian, who made the most important contributions to Constantinople together with Constantinople, remained the most monumental structure of the world for centuries with its size and splendor. Istanbul has survived to the present by confronting many disasters such as fire and earthquake. The construction of the Hagia Sophia Church was started in January 532 by Justinian. Its architects are Anthemios of Tralles (Aydin) and Isidoros of Miletus. Its construction took 5 years and 10 months and was completed on 27 December 537 and opened for use.

Topkapı Palace Museum is a magnificent witness to the history of Istanbul…
Topkapi Palace, which hosted the Ottoman sultans who ruled the world for a period, is now a museum that keeps the magnificent memories of that period alive. Topkapi Palace, built by Fatih Sultan Mehmet after the conquest of Istanbul, which opened a new era in world history, is proudly rising since 1478, dominating the Golden Horn and the Bosphorus.

Grand Bazaar in Istanbul
The Grand Bazaar was built in 1461 during the reign of Sultan Mehmet the Conqueror. The Grand Bazaar is the oldest and largest covered bazaar in the world in the center of Istanbul. Like a giant-sized maze, the Grand Bazaar is a unique must-see center of Istanbul with its 60 streets and more than three thousand shops. This site, which resembles a city and is completely covered, has evolved over time. In the following centuries, the two old buildings with thick walls and covered with a series of domes from the 15th century became a shopping center by covering the developing streets.

Hotel pick-up and drop-off services are available only from the centrum hotels at european side of Istanbul. There might be an added charge for transportations from various other areas or airports.

At lobby near the reception of the Hotels. We may need your room number to find you easier.

Vigo Tours reserves the right to transform the excursion itinerary due to unanticipated situations such as museum closures, holidays, strikes, weather, and also various other events.

Blue Mosque is visited from outside on Friday mornings until 13:00 because of noon-pray.