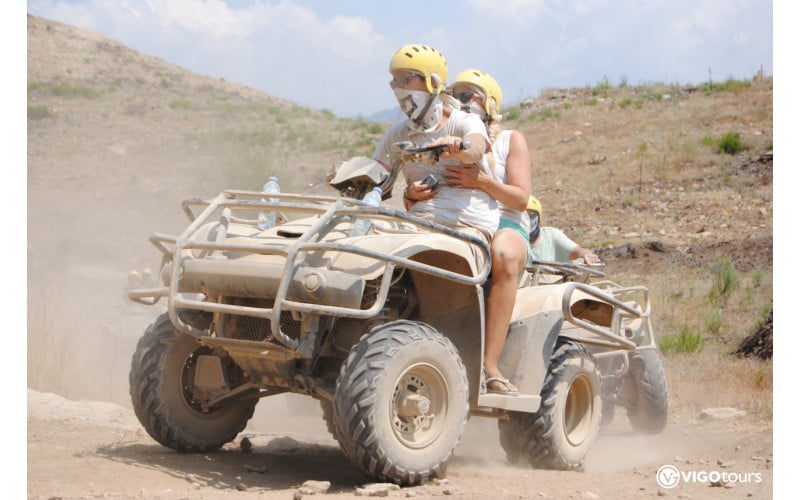 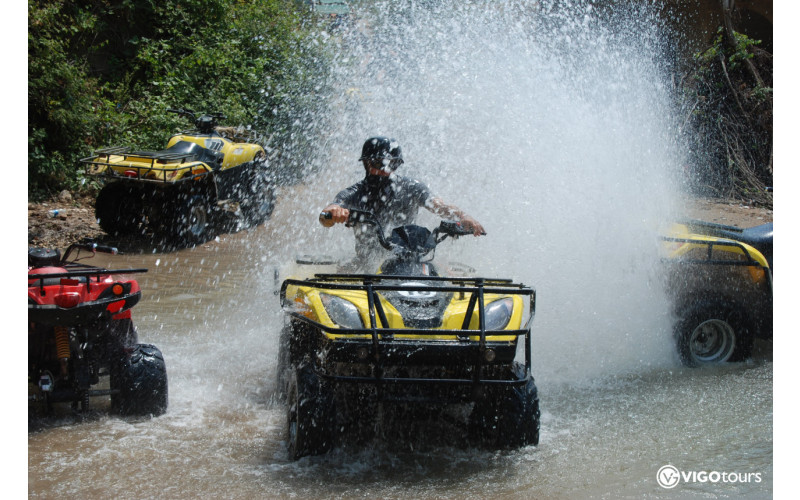 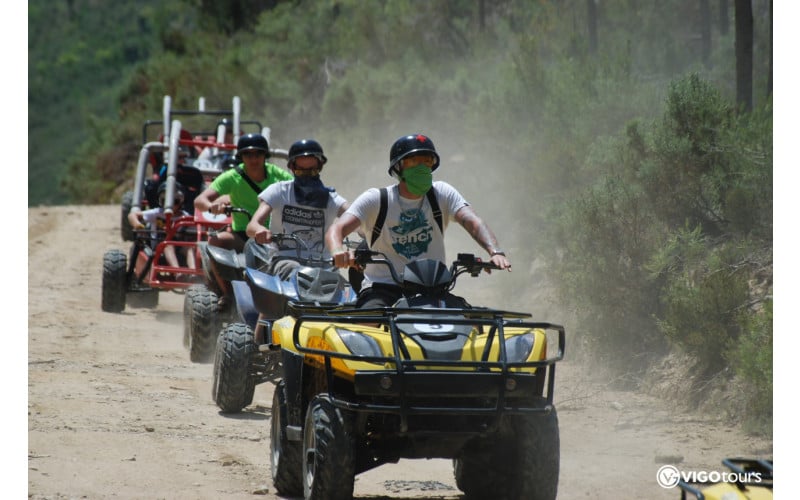 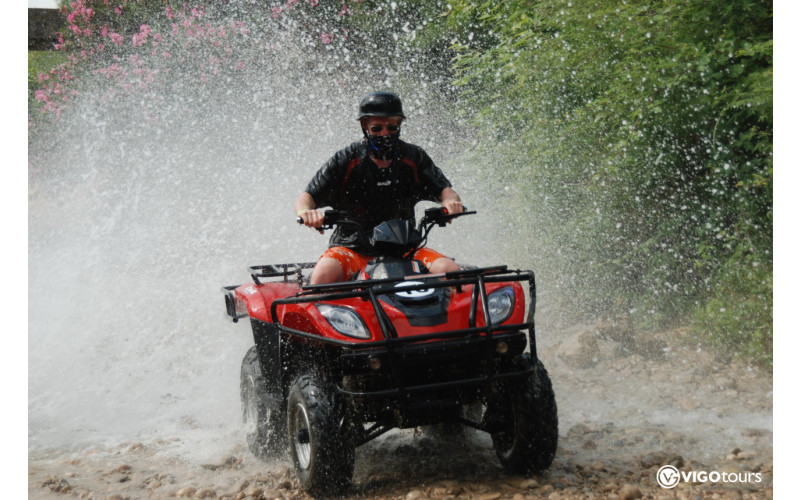 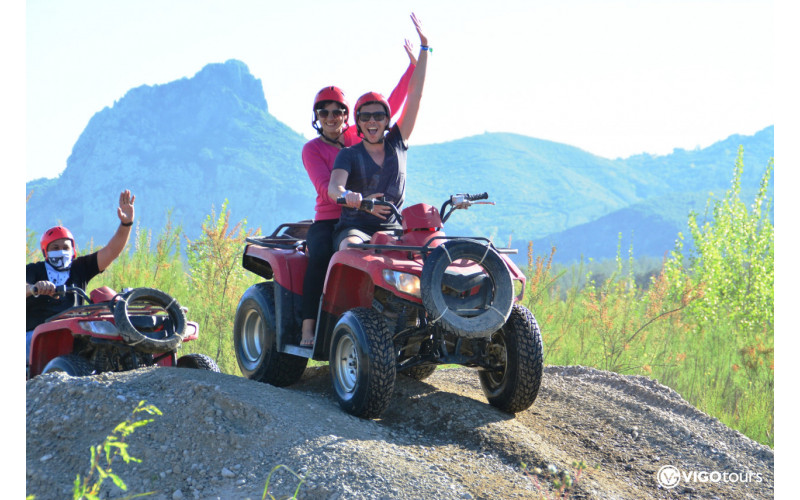 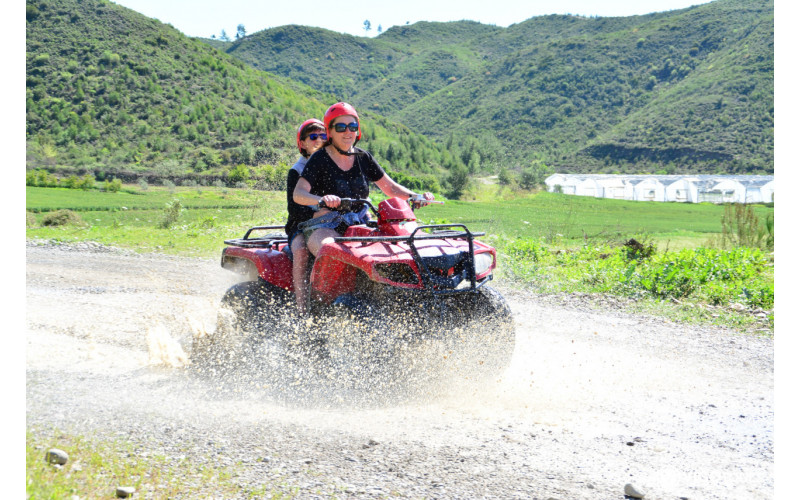 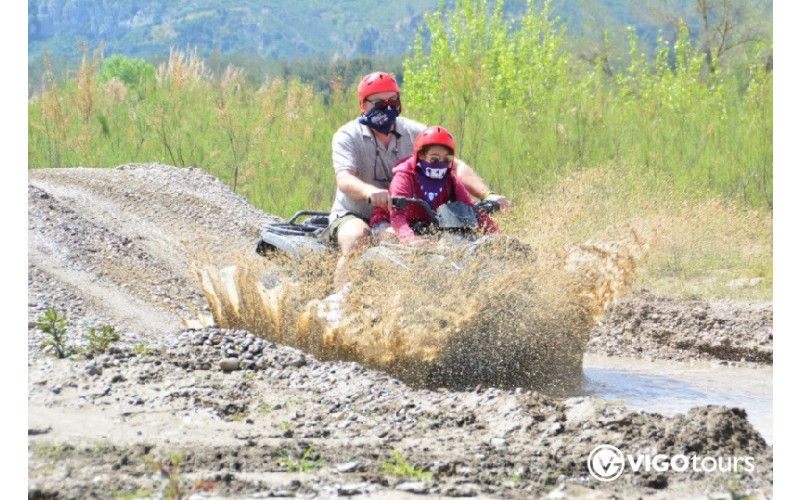 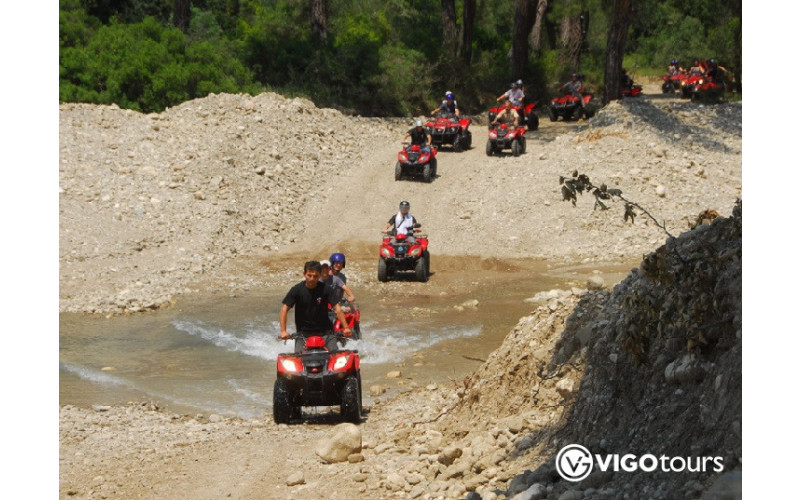 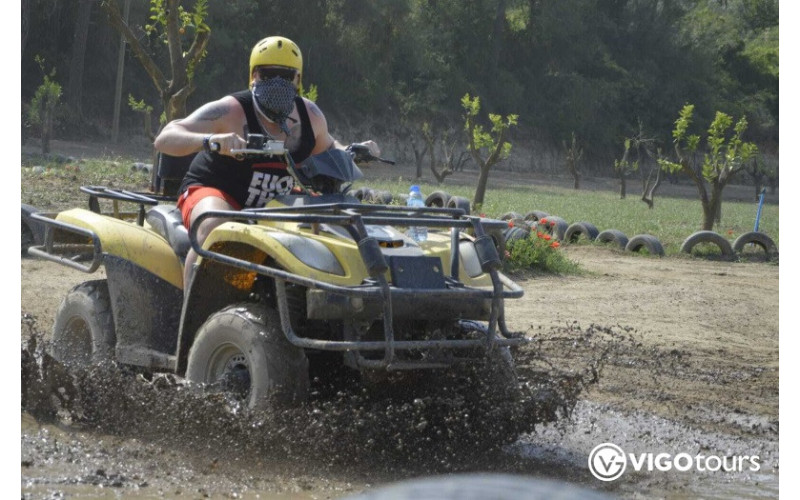 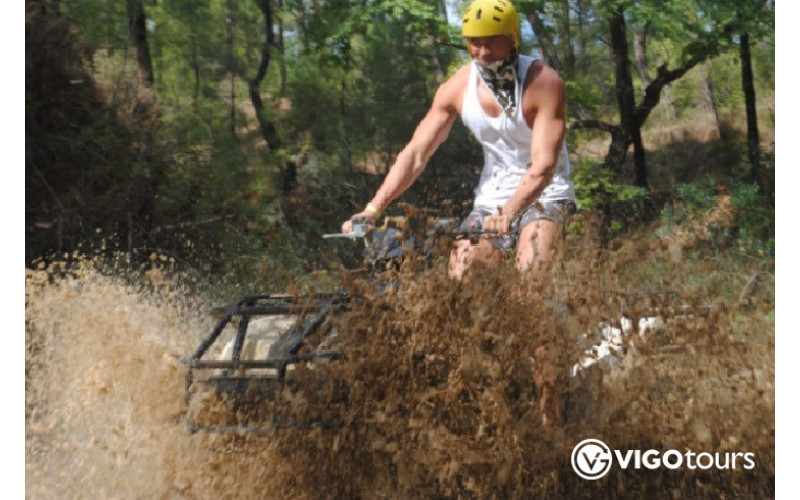 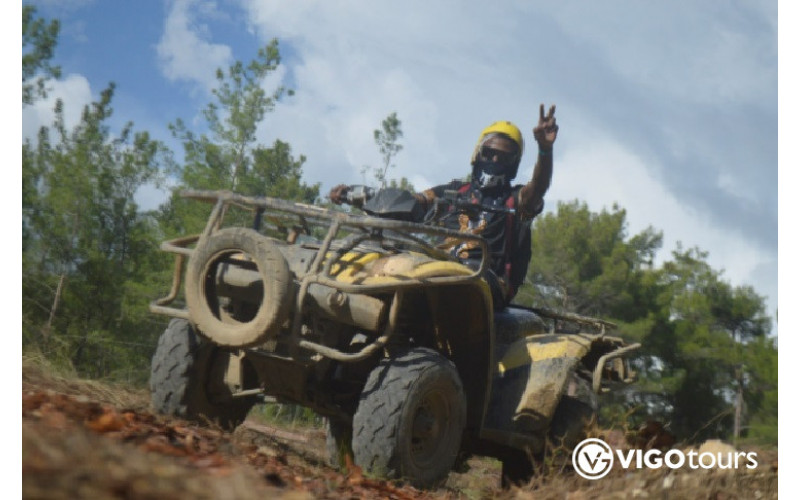 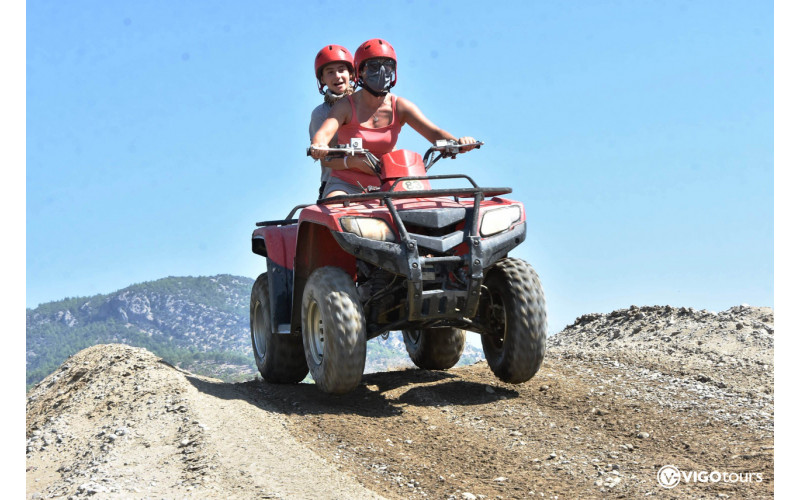 Embark on a thrilling quad biking adventure in Antalya, Turkey - the perfect activity to let off some steam and explore the city's incredible landscape. Antalya quad tour is a fun and adventurous tour on dusty and muddy rural roads outside the city of Antalya. Experience the excitement and enthusiasm on the trails of the Taurus Mountains with Antalya quad tour! Join our groups for a pleasant getaway on your holiday with ATV quad afari tour! You will enjoy adventure and fun on ATV tour in Antalya!

Product Description: Conquer the off-roads with a thrilling quad bike adventure through Antalya, Turkey. This tour is filled with adrenaline-filled activities and underlined by the stunning beauty of ancient ruins overlooking the Mediterranean Sea. Our experienced guides will lead you over dirt tracks and gravel roads guided to explore this exciting terrain!

Features:
- A guided about two-hour Quad Biking adventure
- All safety equipment included
- Be surrounded by stunning views of the Mediterranean sea

Benefits:
- Have an unforgettable experience filled with thrill and excitement as you conquer challenging terrains
- Navigate your way around beautiful surroundings while being accompanied all throughout by expert guides
- Climb through historic sites that are rarely available to tourists

During this adventure and fun tour you go through water mud everything so be prepared to come out covered in mud!

If you’re looking for a thrilling adventure in Turkey, why not take an Antalya Quad Bike Tour? Pick up is available from all the major hotels and resorts along the Turkish Riviera. Experience the rugged beauty of the Taurus Mountains up close with your quad bike! Feel your heart race as you zip through rocky terrain, explore jagged hills and discover hidden gems along the way. Spend a day pumping adrenaline with a Quad Bike tour – it’s an incredible experience you won’t soon forget!

Are you looking for an exciting adventure in Antalya? Then join a Quad Bike Tour! No prior driving experience is needed; our experienced guides will provide a 2-minute training session that will have you ready to go. Over the course of two hours, you’ll drive your bike through rocky terrains, with views of deciduous and coniferous trees growing along the slopes. The streams weaving through the forest offer a stunning sight. When your tour is finished, you’ll be left in awe of the powerful beauty of nature.

Taking a quad bike tour in Antalya doesn't require any prior driving experience or even a license - just a few minutes of training and you'll be ready to go! With the help of some professional guidance and a little trial, you can quickly get the handle of how to ride this exciting two-wheeled off-road machine. Get ready for the most thrilling journey of your life!

Pick up point for Antalya quad safari tour is the main entrance of the hotels from public road. For the hotels in Old Town of Antalya (Kaleici): from McDonald's next to the ancient Hadrianus gate.

According to official rules, drivers and passengers are not allowed to use mobile phones during the tour.

The tour takes place in a rural area 30 minutes from Antalya. These tours must be done outside the city and in the countryside.

No driver's license and no experience are required to drive atv quad motors. Basic driving information is given before the tour starts, and a test drive is made on a small track at the tour departure station before the Tour starts.

Antalya quad safari tour is not a racing tour, it is an enjoyable and enthusiastic group tour. Dangerous speeding is not allowed. It is mandatory to comply with the tour rules for security.

Accessories such as face masks, goggles and scarf for Antalya quad safari are sold at the tour departure station at reasonable prices.

Quad Biking near me!

Get ready for fun and adventure on dusty muddy roads on Antalya Quad safari tour! Challenge the bumpy paths in the foothills of the Taurus Mountains of Antalya with the Antalya ATV quad safari tour!

Antalya Atv Quad biking safari tour with pick up included from all the hotels in Lara, Kundu, Old city of Antalya and Antalya city centrum.

Enjoy Atv Quad tour with Vigo tours in Antalya. Enjoy adventure and fun as you drive through mountains, hills, rivers and forests with these awesome off-road vehicles! You can use a single ATV if you want, or you can join the tour for 2 people by taking your friend, spouse or child behind you. Experience and driver's license are not required for Antalya ATV Quad tour. For the Antalya quad tour, a short training and test drive is made before the tour. Experience the Atv Quad tour on the off-road roads of Antalya! Enjoy the adventure on challenging roads with the Antalya Quad safari tour!

This amazing experience begins after the security briefing. You will cycle through pure nature, pine forests and muddy streams. Enjoy the beauty of the Taurus Mountains and the Turkish landscapes that are so different from the sea landscapes you see so much. Absolutely all rides will return to the starting point wet, dusty and dirty, but in a great mood (make sure you bring an extra set of clothes!). It will be a great day full of fun and adventure. Driving a quad bike around Antalya guarantees only positive emotions and unforgettable impressions. It will be one of the most memorable experiences of your life. What else is amazing about this great attraction is that it includes convenient hotel pickup and drop-off! You don't have to worry about transportation. This is as no frills as possible!

Hi, My husband and I are in antalya for the week and looking to do a quad bike experience one afternoon.  Do you have any available afternoons? If so what is the price and itinerary for your excursions and do you arrange the transfers? Thanks Vicky

Hello from Vigo Tours, Thank you for contacting us. For Quad biking tour in Antalya we have tours 2 times a day in the morning at 08:30 and afternoon 13:00. These are pick times from hotels and are vary with hotel location. Please visit the web page for more details and online booking with downpayment : https://vigotours.com/antalya-turkey/antalya-quad-biking-tour Kind regards, Team Vigo Tours

I had a great experience quad biking over big stones and in the water of Antalya. The track lasted around 2 hours there and back, it was a great fun track but I recommend taking gloves as touring over many stones will hurt your hands and palms in particular!

We had no good experience. Price was quite okay but The whole team had a terrible customer service, half of the people that booked the tickets were not impressed at all! Even though the actual quad biking tour was lots of Fun. We do not recommend!!!

We were constantly told to slow down. We wanted to speed up a little more, but we were prevented from breaking away from the group. For safety this is understandable and already Vigo Tours gave us all the information but we wanted more adrenaline. Adrenaline is not possible with group rules. We were told that we had to do a private tour for high adrenaline.

Be prepared of a tough course!

Had really a great experience quad biking tour over big stones and in the water and mud of Antalya!! The tour course lasted about 2 hours there and back, it was a big fun course but I recommend taking gloves with you as going over many stones will hurt your hands & palms in particular.

It was a lot of fun if I think the engines were strong, ours was 450. I recommend it to adrenaline addicts and I can say that I took comfortable 1.30 hours and I was completely satisfied with riding ATVs.

An amazing mountain terrain ride, absolutely worth every penny paid!

This is one of the best quad tour experiences I have ever had the scenic route we took through the mountain was really amazing, Safety quite ok but honestly I would only recommend adults for this as this is not for the light hearted. .

We had so much fun on the quad tour it is fun but also very controlled for everyone’s safety from start to finish! During the tour you go through water mud everything so be prepared to come out covered in mud!!! But there is outdoor showers at the quad place to wash the mud off before heading back on bus, photos are reasonable price also very good quality & action photos when passing through mud and water:) there is also a drunks bar and place to eat and lockers to lock your belongings and valuables away whilst out on quads, a fantastic day out definitely worth the price. We recommend!