2 Day trip to Cappadocia from Istanbul 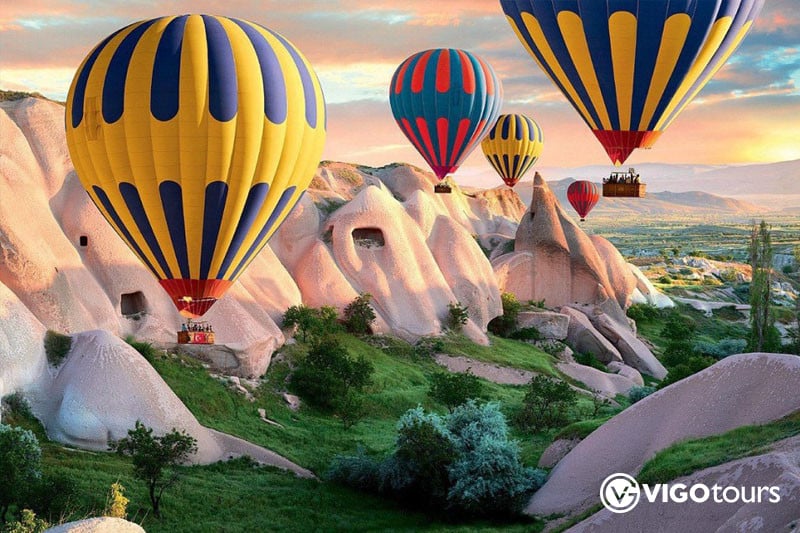 Cappadocia is among the top places to see in the world. Make sure to plan your Istanbul trip for Cappadocia to enjoy this magnificent natural wonder region with a 2-day private Cappadocia tour. Surrounded by extraordinary natural beauties on every corner, Cappadocia is a wonder of the world.

2 Days Private Cappadocia to the most visited places of north and south of Cappadocia with the private tour guide and private vehicle.

Cappadocia, which is commonly thought to be a region of Nevşehir, is actually spread over a wide area, including Nevşehir, but also the central Anatolian cities of Kayseri, Kırşehir, Aksaray and Niğde.

After your arrival at Kayseri or Nevşehir Airport and meeting at the Airport, our Cappadocia tour will begin with a visit to Devrent Valley, notable for its oddly shaped rock formations that, with a little imagination, can resemble seals, kneeling camels and various other animals. We will have a pleasant walk in this uniquely beautiful valley of Cappadocia.

Then we will continue our tour with Paşabağ valley (Monk Valley). Known as both the Pasabag Valley and the "Valley of the Priests", these wonderful landscapes that have preserved their shape for centuries adorn the valley and greet all visitors.

After the Pasabag valley, we will move to Avanos town, which attracts great attention with its red pottery and jugs produced in the region. The longest river in Turkey, the Kızılırmak, passes through the town of Avanos. After lunch, we will visit the Goreme Open Air Museum, which has no other example in the world, to visit churches, chapels and monasteries that were completely carved into the rocks from the 10th to 13th centuries and whose walls were painted with frescoes.

Before returning to our hotel, we will take a scenic tour around the area to take pictures of the unforgettable landscapes of Cappadocia.

On the second day, at sunrise, do not forget to talk to your guide about booking the Balloon tour.

You can also consider attending a Turkish night or whirling dervish show in Cappadocia in the evening.

It would not be wrong to say that Cappadocia is the most important balloon tour center in the world. If you have made a reservation, we will pick you up from your hotel at around 4 am and take you to the balloon flight point. A magnificent balloon ride at sunrise will take one of the first places among the unforgettables of your life. Cappadocia hot air balloon tour takes 1 hour. After the balloon tour, you will be transferred to your hotel.

Hiking in the Rose Valley of Cappadocia

We will meet at the hotel lobby at 09:30 in the morning and go to the Rose valley of Cappadocia, which is the best route for trekking in Cappadocia and exploring the churches carved into the rocks by hiking in the valley.

Afterwards, we will take a rest in Çavuşin, an old Greek village known for its Christian houses and churches.

After a delicious lunch in the heart of Cappadocia, we will visit Ortahisar Castle, which has been used as a settlement for ages.

In the afternoon we will visit Kaymaklı (or Özkonak) underground city. Cappadocia underground cities have been designed and built over generations as shelters against attacks and invasions, both in pre-Christian and Christian times. 7 underground cities built by carving volcanic tuff rocks in various periods before Christ have hosted different civilizations.

On the way back, we will visit Pigeon Valley, one of the most beautiful places in Cappadocia, which impresses those who see it most with its history, nature and extraordinary rock formations.

And at the end of the tour, we will transfer you to Kayseri or Nevşehir airport.

Please write to us for round-trip flight ticket reservation support.

Children on Balloon flights: infants ages 5 and under are not accepted. Age 6 years and older are accepted.

Cappadocia is cool and snowy in winter. Accordingly, it is recommended to take warm clothes with you.