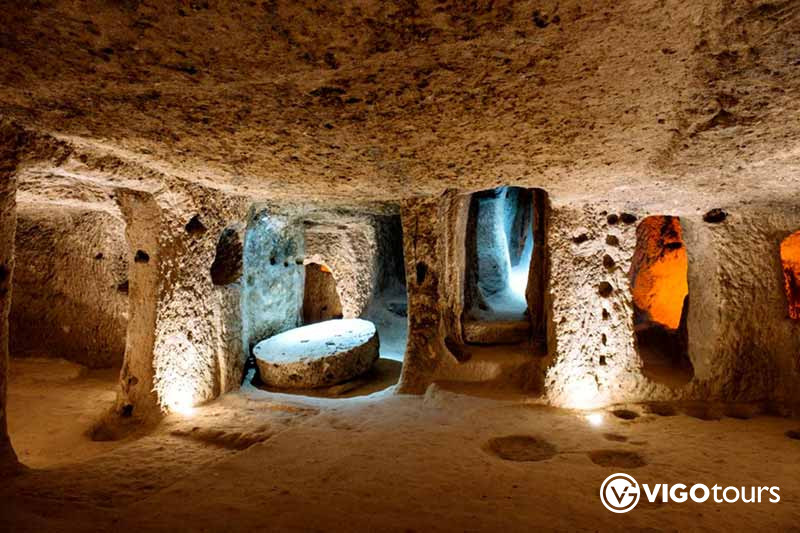 The Cappadocia region of Turkey is strange, beautiful and otherworldly, but it is also famous for its numerous ruins, well-preserved buildings, and quaint villages. This full-day "Blue Tour" allows you to set foot on various places, allowing you to fully explore Cappadocia and learn about its rich history. The tour starts with your guide picking you up from your accommodation in the area.

Which of Cappadocia tours to choose?
If you want to walk and hike : Green or Blue Tour
Interested in churches and monasteries : Blue Tour
If you have only one day in Cappadocia: Red Tour

We will pick you up from your hotel between 09:00 and 09:15 and depart for our full day tour of Cappadocia Red valley & Kaymakli Underground city.

Our tour starts of visiting the very interesting fairy chimneys of Cappadocia shaped like family; father, mother and the daughter. Some calls them 3 beauties. and then we will start for a hiking through the famous rock churches in most impressive valley of Cappadocia; Red Valley.

After hiking at Red valley we will give a break for lunch in Ortahisar castle of Cappadocia before departing to Kaymakli Underground city.

Panorama break at pigeons valley of Cappadocia hosting countless pigeons in natural pigeon houses. These pigeons importantly contribute to live of local people with their manure to fertilize the vineyards of Cappadocia region.

Before transferring you to your hotel you will have a plenty of time to take some picture of Cappadocia's beauties.

We do pick up from all the hotels in Cappadocia region.

Please inquiry us of the guiding for other languages. The tour is operated on sharing basis maximum 16 passengers by fully air-conditioned, non-smoking and in good standard vehicles.
Private tour is available on request.

If you are interested much in history, please consider Cappadocia Blue Tour

Which of Cappadocia tour to choose?

In order to get more detailed information about the tour packages of Cappadocia, you should do a good research and decide up by setting priorities according to where you want to see and visit. If possible, spend at least 2-3 days in Cappadocia and take a complete tour of Cappadocia using the different tours (Red, Blue and Green) packages. Of course, remember to experience the nature activities of Cappadocia region!

Cappadocia is simply a magnificent place. We stayed for 3 days and had great experiences.