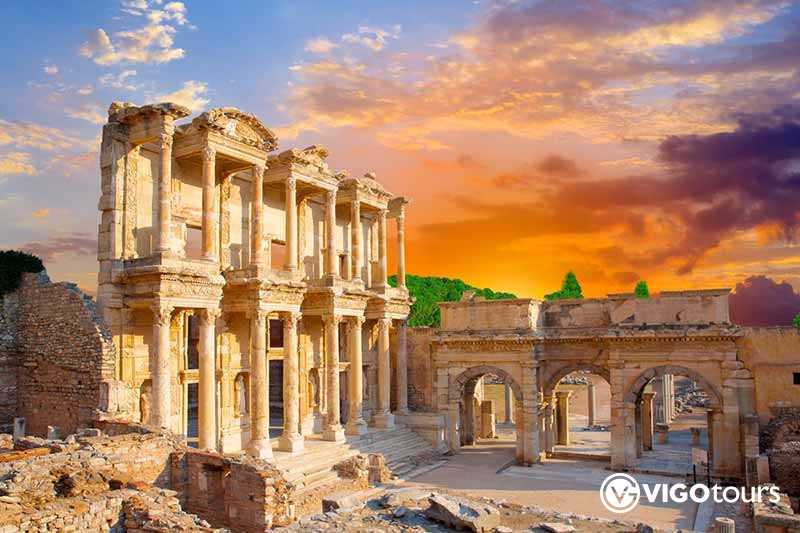 Ephesus, the Anatolian capital of antiquity, is one of the 7 wonders of the world as a magnificent metropolis. This mega ancient city, which has been standing for thousands of years with its unique architectural masterpieces, has also entered the World Heritage List.

An amazing day tour from Kusadasi: Full-day guided tour of the Ancient City of Ephesus

The magnificent city of Ephesus, the Anatolian capital of antiquity, is a great and unique archaeological treasure of the world as a magnificent metropolis! The history of the magnificent Ephesus Ancient City dates back to 7000 BC!

The unique port city of Ephesus, where immigrants from Greece started to live in 1050 BC, was moved around the magnificent Temple of Artemis in 560 BC. The unique city of Ephesus, which lived its most glorious periods in the Hellenistic and Roman periods, is known to have a population of 250 thousand as the magnificent capital of the Asian region and the largest port city.

A unique masterpiece, the ancient city of Ephesus: You must see this magnificent ancient treasure!

The Ancient City of Ephesus has been included in the World Heritage List. This situation has caused this very valuable ancient city to become much more popular today and the number of visitors has increased rapidly from year to year. The city of Ephesus, which hosts the magnificent Temple of Artemis, is one of the most frequent destinations for people from all over the world. This magnificent and unique architecture, which has survived from the Roman and Hellenistic periods, amazes its visitors and takes them into a completely different world.

There are many enormous ancient ruins in this wonderful ancient city, which is 3 kilometers away between its 2 gates. The first of these is the magnificent Celcus Library. This unique library, built in the 2nd century AD, was among the most important libraries of that period. In addition, the Hodrian Gate and the Hodrian Temple on Curetes Street are among the very important and valuable ancient structures.

The house where the Virgin Mary spent her last days

The House of Virgin Mary is located on Mount Bülbül, 9 km from Selçuk town. About 5 or 6 years after the death of Jesus, St. It is known that John brought the Virgin Mary to the city of Ephesus. In 1891, Lazarist priests revealed that the house where the Virgin Mary spent her last days upon the dream of German nun A.Katherina Emmerick was this house on Bülbül Mountain.

Full-day guided tour of the unique ancient city of Ephesus, including pickup and drop-off from Kusadasi hotels and Kusadasi cruise port

The morning meeting place for the tour is the first main entrance gate of all Kusadasi hotels. Our tour bus cannot enter the borders of the hotels. The drop off location is also the same. For cruise ships: It is the passenger exit and entrance gate of the port.

Full-day guided tour from Kusadasi to the magnificent ancient city of Ephesus, one of the 7 wonders of the world

Please wear comfortable clothes, a hat, and comfortable walking shoes. There will be approximately 3.5 km of walking throughout the tour.

Take your camera (without professional equipment)

Customers must be ready at the departure point (first main entrance gate of the hotel) 5 minutes before the exact pickup time.

For children, take their passports with you.

Daily trip to Pamukkale from Kusadasi