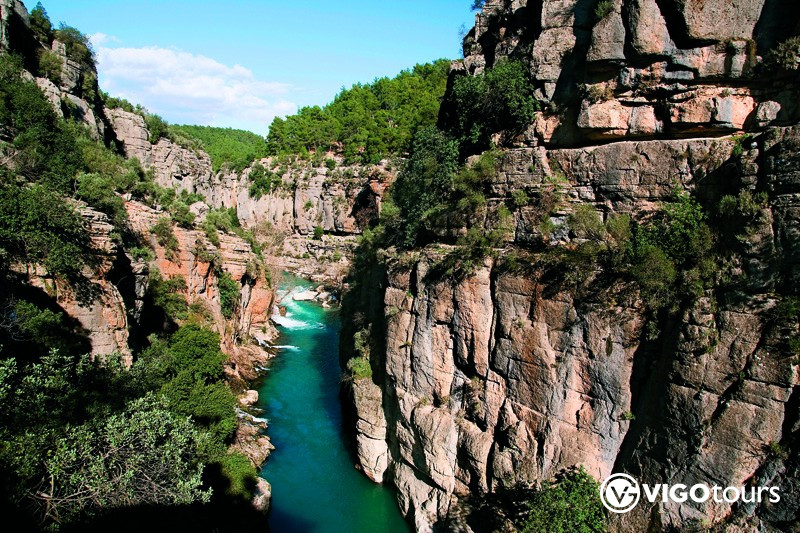 The ancient city of Selge is 11 km away from the Oluk Bridge and the Köprülü Canyon. This road, which reaches the ancient city by climbing the mountains, has a very special view with its special cypress forests, fairy chimneys, man rocks, devil rocks, interesting landforms and oleander. The summer temperature drops about 10 degrees in Selge compared of sea level.

Selge ancient city tour from Side, Full day tour at the Taurus mountains with its stunning and majestic nature

Selge, among the hill cities of ancient Pisidia, lies on the southerly side of the Taurus Hills and also at an altitude of 1,250 meters from the sea. Hundreds of local people and also international vacationers oftenly visit the ancient city. At Selge, you can see the ruins of ancient city, numerous historical pieces including the walls, holy place ruins, churches and burial places.

The ancient city of Selge, located in the village of Altinkaya, hosts rich historical ruins. In the past, it was known that the residents of Selge city provided income from olive, wine and medicinal plants. When the Kingdom of Galatia was established in 25 BC, Selge had lost its independence for some years, but then the good relations with the Roman administration were ensured. Thus, the empire lived independently until it was destroyed. From the coins, it is understood that the economy remained quite strong until the 3rd century. The ancient city Selge of the Roman period, remained as a strong and prosperous city until the 2nd century AD.

Selge is a lovely village with ancient ruins.  An the journey to reach to Selge through the mountains is really breathtaking. The women of the village are very happy to show you the ruins of theater. It is a good chance to see Turkish rural life of today, And the contrasts beautifully with developed seaside resorts like Side.

Tour program for Selge ancient city tour from Side,
Full day tour of the stunning Taurus Mountains from Side

Pick up and departure place: All the hotels in Side

Main entrance gate of the hotels (not the lobby or reception).

Daily tour from Side to the ancient city of Selge, located in the attractive high Taurus mountains

The altitude of Selge is about 1300 meters from sea level.

Visitor tips:
The entrance to the ruins of Selge ancient city is free of charge and the ruins are not being guarded or fenced off, so it is possible for visiting them at any time of the day.

As Selge ancient ruins stand in the center of Altınkaya village, many of the modern buildings of village were erected with the material obtained from ancient structures. The village itself is so small and, despite its relative closeness to the touristic hub of Turkish Riviera, appears to be quite poor. Its inhabitants of the village work as goat shepherds, and visit by tourists to the village is seen as an opportunity for some additional income by villagers. You can buy from them local handicrafts, scarves, napkins, tablecloths and some other items at favorable prices, much lower than on the cities, and, at the same time help their low budget.

In the village there are some small grocery stores and a local tea & coffee shop that opens occasionally. If you go there by your own the best idea is to bring your own lunch for this trip, because these facilities may be closed. Also the villagers are being very happy to serve some of their food for visitors.

2 Day trip to Pamukkale from Side

Side Rafting tour from hotels in Side region

Big Game Fishing Tour in Side

Paragliding experience in Side Turkey

Jeep safari nature and adventure tour from Side